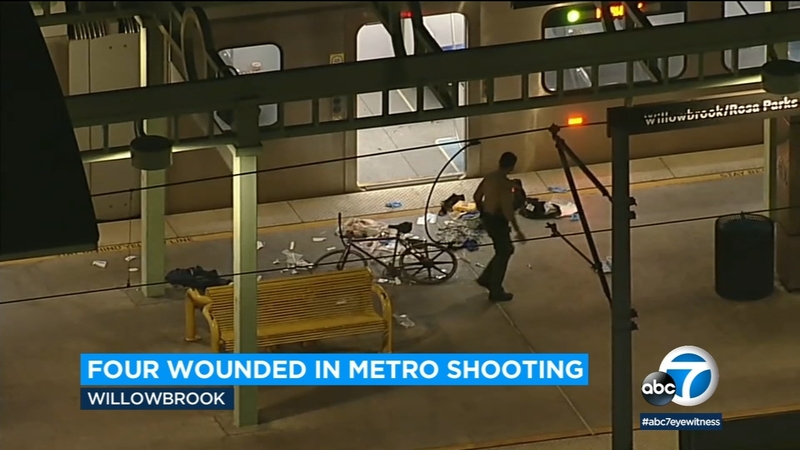 The shooting was reported at about 7:40 p.m., according to the Los Angeles County Sheriff's Department.

LASD said deputies responded to the scene and found the four victims suffering from gunshot wounds. Three of them were critically injured and the fourth victim had minor injuries.

Those wounded were transported to be treated for their injuries, according to the Los Angeles County Fire Department.

Witness Andrew Maynard said the shooting came after an argument on the Metro between three individuals - described as being in their late teens or early twenties - and three men in their 40s or 50s.

"Then all of a sudden one of the young guys pulled out a gun and just started shooting into these guys, and the one guy took off running towards me and they shot him in the leg," Maynard said.

Maynard said the bullet flew right by him.

AIR7 HD footage captured a bicycle left behind and blood-stained towels on the platform.

Shortly after deputies responded to the shooting, police were involved in a crash nearby that left eight people injured in the 10600 block of South Central Avenue around 8 p.m., according to LAFD. All patients - two officers, two children and four adults - had injuries described as non-life-threatening, according to the fire department.

LAPD later confirmed its officers were involved in the crash and were responding to the shooting at the Metro station before the collision.

The police department also said other LAPD officers in the area took a person into custody who was possibly involved in the shooting.