'You are loved': Woman responds with sympathy for attackers after violent robbery in San Francisco 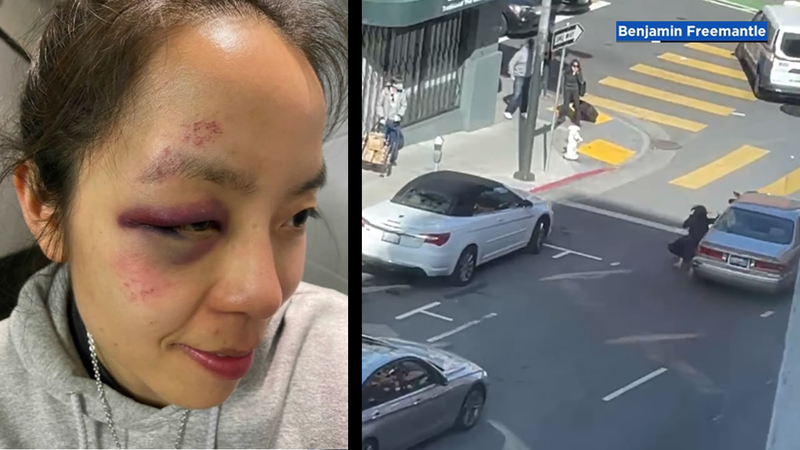 SAN FRANCISCO -- A San Francisco woman is speaking out about a dramatic daytime robbery and attack, where she was dragged by a getaway car and fell into the street.

The video above shows the injures Clarisse sustained after she was attacked by three unidentified suspects in broad daylight.

There are dark purple bruises near her right eye and on her arm. There are cuts and scrapes on her hand and foot.

It all unfolded when she and a friend were walking home from church Sunday afternoon.

According to witnesses, Clarisse was approached by three suspects from behind, including a man in an orange ski mask, at the intersection of Polk and Bush streets. One grabbed her handbag, but instead of letting go, adrenaline kicked in and she held on.

A San Francisco girl scrawled "help...robbers!" on a wall in the bathroom she was forced to stay in by one of two men who ransacked her family's home in the Portola district of San Francisco Friday afternoon.

That resulted in three punches to the face. Even so, Clarisse was determined to get her bag back and hung on to the side of a getaway vehicle, and was dragged down the street.

When the car lurched suddenly, she fell onto the pavement.

Video taken by a man named Benjamin Freemantle from a nearby apartment building shows witnesses rushing to her aid.

Clarisse is hoping her perpetrators are caught and that justice is served, but credits her faith in God for getting her through this ordeal.

She sends this message to the perpetrators.

"Know that you're loved, know people are there to help you. I know it's hard now but we need to get back and have people in work and school so they are predictively occupied and don't feel like they need to do things."

Clarisse doesn't know if this was hate-motivated but her friend, who also sustained minor injuries, believes the crime could be. Clarisse said she is appreciative that police are investigating.