While the pandemic has negatively impacted everyone, the gap between men and women who are burned out has nearly doubled.
WPVI
By Nydia Han 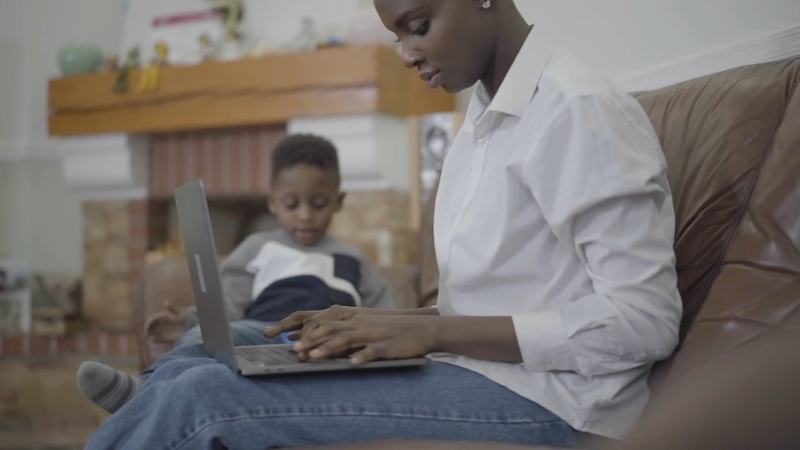 PHILADELPHIA -- The labor force continued to shrink in September, with five million fewer people working last month than before the pandemic began. While there are many reasons for the continuing worker shortage, women are disproportionately impacted.

While the pandemic has negatively impacted everyone, the gap between men and women who are burned out has nearly doubled.

A growing number of women are looking for flexibility and remote work, primarily because of childcare issues.

Cyka Lindsey is mom to a beautiful little girl.

Before the pandemic, Cyka worked at Inspira Health Network.

"I was doing environmental services. So I was cleaning those units, bathrooms, everything," she says.

She quit in October 2020. So it's been about a year since she's been out of the workforce.

But why did she quit?

"I quit because my sister had gotten sick with COVID. She was watching my daughter at the time," Cyka says.

Even after her sister recovered, she stayed home with Sa'Maya, worried about her daughter's health and safety.

Nearly half of all women say the pandemic has hurt their career path.

According to a MetLife survey of 2,000 U.S. workers in September, nearly 1 in 5 say they've been pushed out of the workforce altogether, at least for the time being.

Where is the workforce? COVID-19 pandemic tops the list of worries
EMBED More News Videos

People aren't just choosing not to return to work... a record number of people are quitting amid COVID-19 concerns.

"I just graduated two months ago from surgical sterilization technician school. So I'm just ready to get back in the workforce and I'm ready to do my thing," she says.

Like Cyka, two in three women say they do plan to return to work.

But there's a new and growing obstacle: a lack of childcare.

"Called a bunch of places in Camden to look for spots," she says. "They told me the spots are filled. There's no place to put her."

"Every daycare today has told me that they have no spots," she says.

The childcare industry is suffering its own dire shortage of workers, many taking jobs with higher pay.

According to a policy hearing by State Rep. Dianne Herrin (D-156th), in southeastern Pennsylvania, 94% of child care centers are short on staffing.

That is forcing some centers to offer workers more money to stay, and that, in turn, is forcing many to pass along the increased cost to families, making it unaffordable.

Couple that with the ongoing risk that schools may suddenly return to virtual learning due to COVID exposures.

"As a staffing firm, more companies are coming to us looking to fill their positions because of the lack of applicants," says Kristin Kane Ford, with Kane Partners LLC.

Kane Ford says even in cases where candidates apply and interview, they're ultimately turning jobs down if remote work isn't an option.

"They're enjoying flexibility, they enjoy not having a long commute," says Kane Ford.

Another recent poll found that 76-percent of working Americans say they want their company to make work permanently flexible in terms of schedule and location.

The MetLife report finds women are overwhelmingly looking for increased flexibility - a whopping 78% says it's a goal.

"It's easier to pick kids up, head after school to practice, people are getting more accomplished because of that lack of commute," she says.