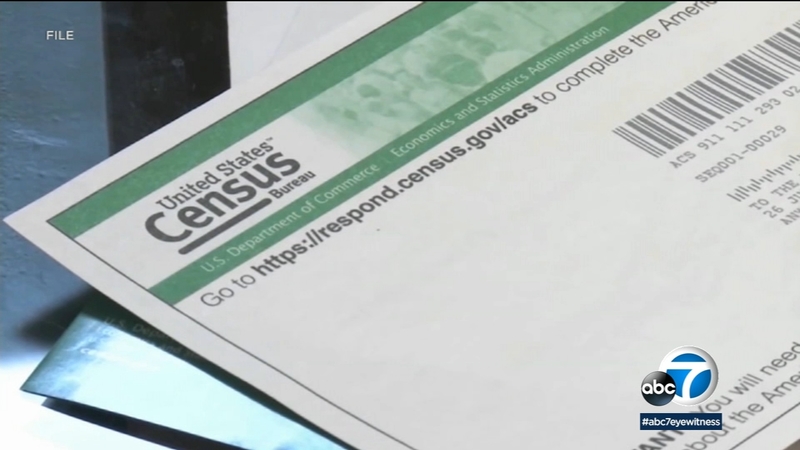 LOS ANGELES (KABC) -- California Attorney General Xavier Becerra filed a federal lawsuit against the Trump administration over the president's attempt to keep undocumented immigrants from being counted in the 2020 Census.

"The law requires that everyone in America, whether citizen or not, be counted," Becerra said in a virtual news conference Tuesday morning. "Not even the president of the United States can sidestep the U.S. Constitution."

Last week, Trump issued a memorandum ordering undocumented immigrants not be counted when it comes to determining states' congressional seats.

Los Angeles County residents are falling behind the rest of the state in responding to the 2020 census, leading county officials to remind everyone that responses drive funding for health care, schools and senior services, among other critical needs.

"His primary objective is to rip political power away from jurisdictions that have many immigrants to those locations that don't," said Feuer. "We are going to do our job in court. This latest move by the president is blatantly unconstitutional. Every person regardless of immigration status counts."

Right now, California has more than two million undocumented immigrants and 53 seats in Congress. Experts warn if those people are not counted, California could lose one or two seats at the Capitol. A low census count would also cost the state federal funding.

"It would try to prevent California from having its full representation in Congress, and it would try to deny Californians their taxpayer money that they contribute to the U.S. Treasury coming back to their communities," Becerra asserted.

Eyewitness News reached out to the White House for comment on California's latest lawsuit. Our request has gone unanswered.

"What he's doing is really telegraphing an effort to intimidate people, an effort to scare people into not participating in the census," said Becerra.

The state of California is being joined in the lawsuit by the cities of Los Angeles, Long Beach and Oakland. The lawsuit was filed in the U.S. District Court for the Northern District of California.