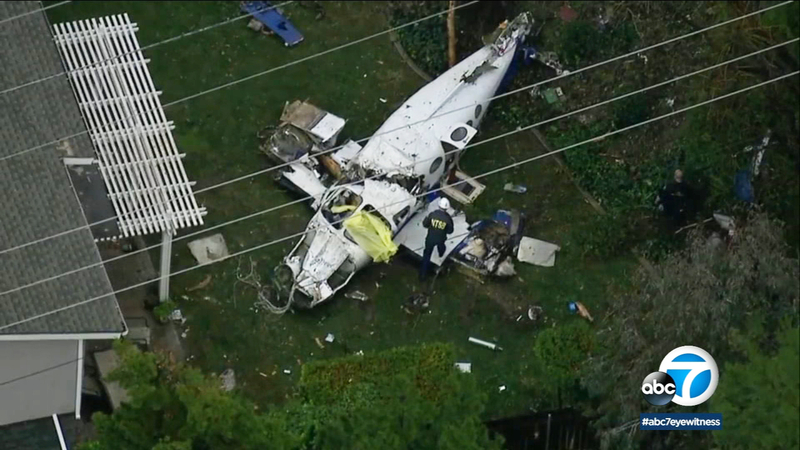 OC plane crash: What we know about NTSB investigation

YORBA LINDA, Calif. (KABC) -- National Transportation Safety Board officials are seeking additional witness video and testimony that may help their investigation into the deadly plane crash that killed five when a flaming twin-engine Cessna slammed into a Yorba Linda neighborhood over the weekend.

Here is what we know so far about the NTSB investigation:

Maja Smith, the NTSB investigator in charge, said the 1981 twin-engine Cessna 414A, with the registration number N414RS, took off at 1:35 p.m. Sunday from Fullerton Municipal Airport. The preliminary data shows that the aircraft climbed about 7,800 feet before making a sudden decline down with one person aboard.

Witnesses have reported that they saw the plane come out of a cloud at high speeds before it broke apart midair. Smith said that so far, that sounds consistent with the large debris field that is now in place in the Yorba Linda neighborhood where the wreck landed.

No explosions were reported and no distress calls were made to the NTSB at the time.

Parts of the plane impacted a house and killed four people inside. The fuselage went down a hill and landed in the backyard of a nearby home.

The debris field is so large that one of the challenges has been to gather and collect all of the plane's parts. For that reason, Smith said, anyone who finds additional parts is encouraged to come forward. You may reach out online at NTSB.gov.

The debris field extends across four blocks, which covers about 15 or 16 homes, Smith said.

The wreckage is expected to be taken to a secure location in Phoenix Monday night, where NTSB officials will examine the airframe and engine.

NTSB officials also plan to investigate the pilot's medical records and flight experience. They will reconstruct the aircraft and look into the structural integrity of it. Investigators also plan to find out where the plane broke off and why and check whether weather and other environmental factors contributed to the cause of the crash.

The pilot, identified by sheriff's officials as 75-year-old Antonio Pastini, was commercially licensed and had an IFR rating.

Part of the right wing was not immediately recovered at the scene of the wreck, and Smith said the NTSB planned to look inside the house to search for it.