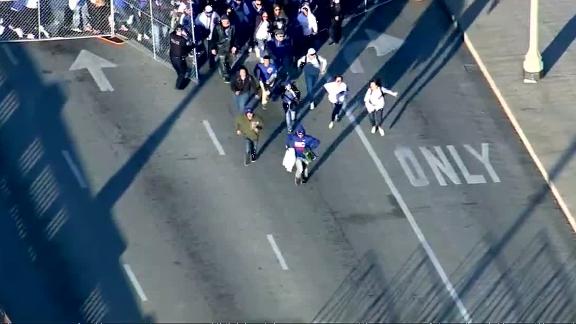 CHICAGO -- Cubs players enjoyed their victory lap Friday, waving to millions of elated fans crowded along miles of city streets during a parade honoring the first Cubs team to win a World Series title in 108 years.

The Office ofEmergency Management and Communications told the Chicago Tribune that an estimated crowd of 5 million packed the 7-mile parade route from Wrigley Field to Grant Park, where the party continued with a massive rally to celebrate the Cubs' historic win.

Team manager Joe Maddon -- wearing a stocking cap, sunglasses and a jersey over a "We didn't suck" T-shirt -- looked out over a sea of blue.

"Welcome to Cubstock 2016!" he shouted to the fans after carrying the World Series championship trophy onto the stage. "This is an incredible moment for all of us. Never have I experienced anything like Wrigley Field on a nightly basis. ... I want to congratulate you fans also. Thank you for being so patient."

One by one -- from CEO Tom Ricketts to president Theo Epstein to coaches and players, past and present -- they all were introduced to their adoring, roaring fans. Catcher David Rosseven posed for a selfie before serenading the crowd with a rousing rendition of "Go Cubs Go!" along with his teammates before fireworks capped the 90-minute rally.

Said first baseman Anthony Rizzo, who got teary-eyed while speaking at the rally: "It happened, baby. It happened!"

Rizzo singled out 39-year-old Ross, who is retiring and isaffectionately called "Grandpa" by the team's younger players, before capping his speech by giving Ricketts the ball from the last out of Game 7.

A victory party is new territory for long-suffering fans of the Cubs, who hadn't won a World Series title in more than a century before their Game 7, extra-inning thriller against the Cleveland Indians on Wednesday.The last time the Cubs even reached the Fall Classic was in 1945.

Earlier, on the parade route, throngs of young and old blue-clad fans roared as the motorcade of open-roofed buses carrying the players cruised along Lake Shore Drive. The mood was jubilant, bolstered by an unseasonably warm and sunny November day and clear blue skies.

The parade wound through downtown and ended roughly 7 miles south in Grant Park. The route also took the buses over the Chicago River, which the city dyed a bright shade of blue to match the Cubs' colors, repurposing a decades-long tradition of dying the river green on St. Patrick's Day.

Ricketts told the crowd that the players on the World Series team are "going to be Chicago baseball legends."

He said he was used to fans coming up to him, asking when the Cubs were going to win a World Series. "For the thousands of people who have said that to me, there you go," Ricketts said.

Vendors hawked pennants and shirts, and selfie-taking teens tried to capture the crowds. Many just beamed.

Retiree Jarvis Moffett, 60, arrived at the lakefront park hours ahead of the rally just to take in the atmosphere.

"I'm an old-school Cubs fan," he said, gesturing to the sky and crowds. "This is what you live for. It doesn't get any better."

Miriam Santiago, 51, said she carried holy water, her rosary and a bright green lucky baseball with her during the playoffs. On Friday, she brought a goat mask with dynamite in its mouth and let other fans pose for photos wearing it outside Wrigley Field. She said she believes her lucky charms helped reverse the curse.

Atop the double-decker buses, some Cubs players posed together for photographs, while others held their children and sat with their families. Center fielder Dexter Fowler had a cigar as the team headed toward the rally that some fans have called the "celebration of a century."

Fans packed morning commuter trains, causing delays despite increased service and capacity, to get downtown and find a viewing spot before the festivities began.

Laurie Winter woke up at 4 a.m. so she and her 2-year-old son, Cooper, could come in from the suburb of South Elgin and be among the fans outside Wrigley Field to see the players.

"I think everyone is excited about where this team is going," Winter said. "We can't wait to see them come out and get crazy."

The city estimated 2 million people attended similar events in 2015, after the Chicago Blackhawks won their third Stanley Cup in six years. Obviously, with the 5 million estimate Friday, generations of Cubs fans had far more pent-up celebrating to do. 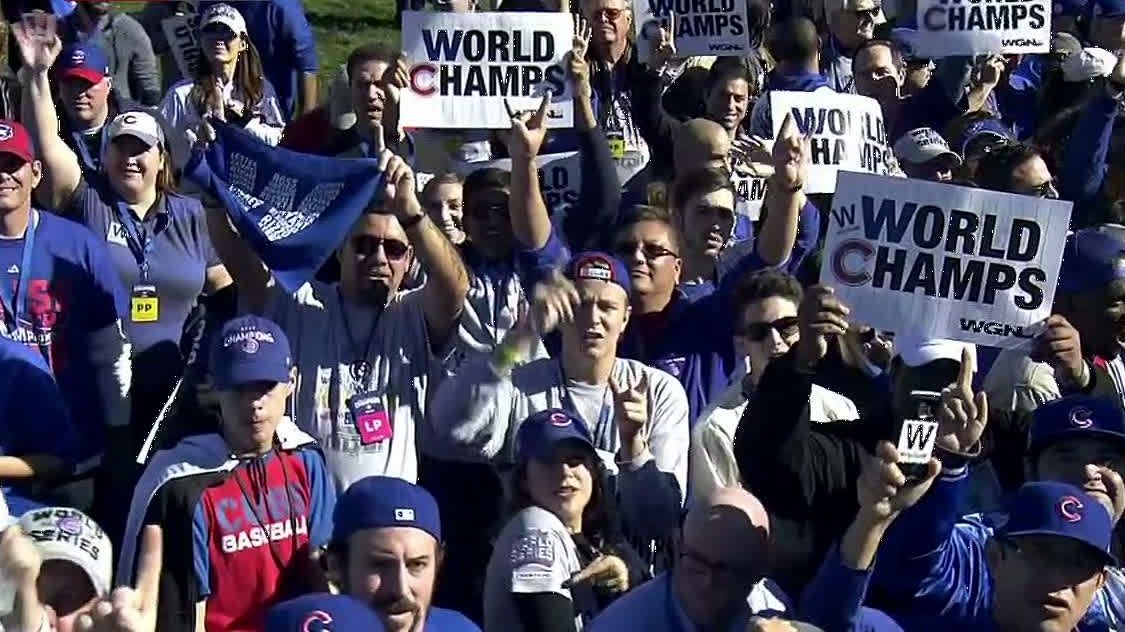 Cubs parade makes the 108-year wait worth it
Cubs fans came out in masses to support their team after its 108-year World Series drought. 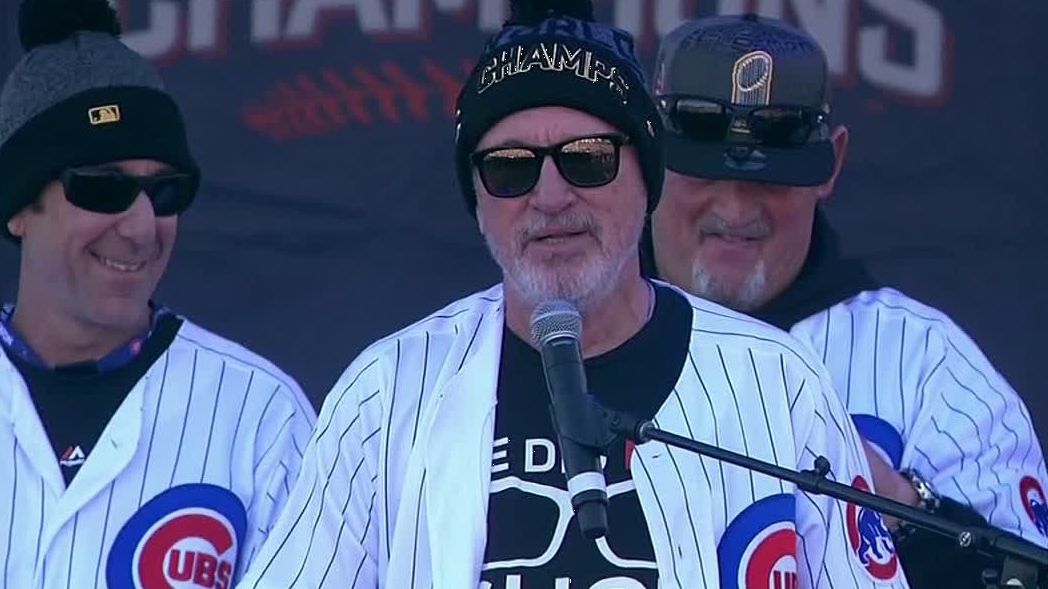 Maddon congratulates fans on World Series win
Joe Maddon thanks the fans for staying patient during the tough times and jokes that it doesn't take another 108 years to win another World Series. 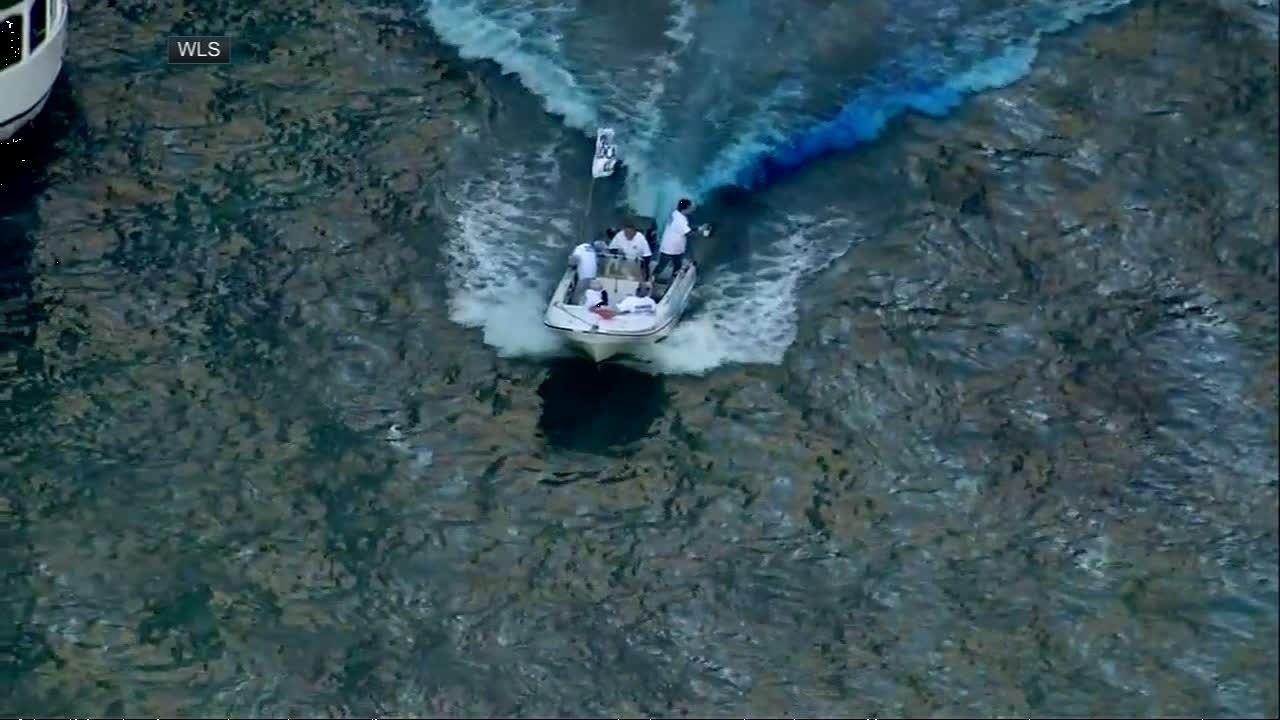 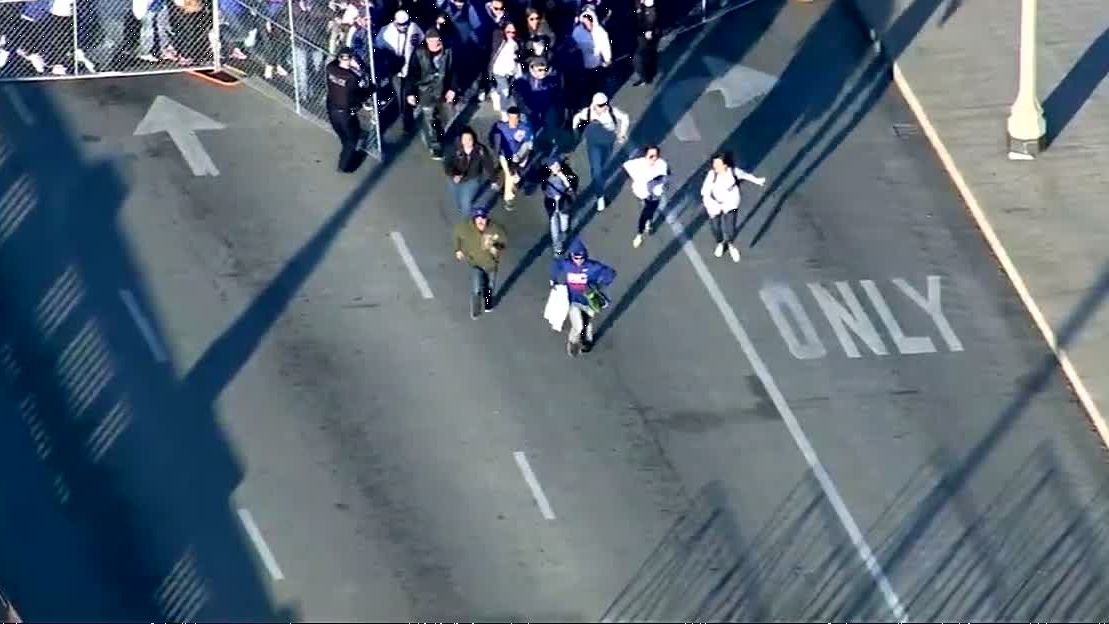