The council vote came Tuesday and voided a 2020 agreement to sell Angel Stadium and surrounding property to the team owner.
City News Service 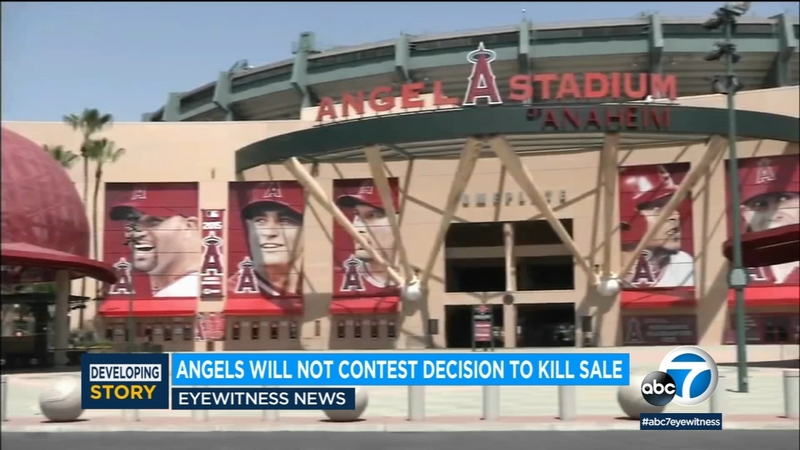 ANAHEIM, Calif. (CNS) -- The troubled deal for Anaheim to sell Angel Stadium to team owner Arte Moreno is officially dead now that he has decided not to challenge a City Council decision this week to void the proposal.

"Given that the City Council unanimously voted to cancel the stadium land agreement, we believe it is [in] the best interest of our fans, Angels Baseball, and the community to accept the city's cancellation,'' Marie Garvey, a spokeswoman for Moreno's firm SRB Management said in a statement Friday. "Now, we will continue our focus on our fans and the baseball season.''

Still, SRB criticized what the firm characterized as "misinformation'' that lead to the deal's collapse and denied all allegations of wrongdoing.

"For almost a decade now, Angels Baseball has been working with the city to be able to continue to deliver a high-quality fan experience at Angel Stadium and create certainty on the team's future in Anaheim,'' according to the SRB Management statement. "There has been a lot of misinformation and falsehoods stated throughout this process and we want to be clear, we negotiated in good faith with all elected officials and city staff and created a fair deal that was good for Anaheim and Angels Baseball.''

"We welcome and thank the Angels for their mutual understanding of what is called for in this moment,'' O'Neil said in a statement to the Los Angeles Times. "It is the right thing to do. But a long-term plan for the stadium site and baseball in Anaheim are still opportunities we want to explore. We will continue working to get past this moment with the door open for a fresh start when the time is right.''

The council vote came Tuesday and voided a 2020 agreement to sell Angel Stadium and surrounding property to Moreno and his SRB Management LLC.

One day earlier, Harry Sidhu resigned as the city's mayor amid an FBI investigation alleging he fed insider information to the Angels in hopes of a substantial campaign donation, and also cheated on sales taxes for a helicopter he bought.

The City Council received notice May 16 of a federal investigation into Sidhu's involvement in the sale and the council asked the city attorney to inform the Angels of the decision to void the deal Wednesday, according to media reports.

"The stadium proposal was evaluated and approved on its merits,'' O'Neil said Tuesday in a statement released by the City Council. "However, knowing that there may have been an element of corruption that brought the
final product to us, we cannot move forward in good conscience.''

Moreno, through SRB Management, was initially said to be "exploring all of our options,'' following the council decision. The sale agreement allowed SRB to seek up to $5 million plus legal costs if the city defaulted.

It was unclear what costs Moreno would pursue.

Anaheim Mayor Harry Sidhu has resigned amid an FBI's corruption probe related to the sale of Angel Stadium.

The council decision also ends prior negotiations involving the sale of the stadium site that started in 2019 and resulted in agreements approved in September and October 2020.

The city-owned stadium and 151 acres of land was set to sell for $320 million, paid partly in cash and partly in affordable housing and a park built on the stadium site.

The deal was subject to updated sale and development agreements, and reflected a now-paused settlement with California officials related to the Surplus Land Act, that were supposed to go before the City Council in June, the final step before the close of the sale.

The Angels have a lease to play at Angel Stadium through 2029 with the option for three three-year extensions through 2038.

Now that the Anaheim sale is dead, the idea of a possible team relocation to Long Beach quickly resurfaced Wednesday. Long Beach officials approached the team in 2019 about the possibility of moving the team to a stadium that would be constructed along that city's waterfront, adjacent to the Long Beach Arena and Performing Arts Center.

"The Long Beach waterfront downtown has always been the perfect location for a major league sports stadium,'' Mayor Robert Garcia said in an email to the Long Beach Press-Telegram. "If any sports team is interested in engaging the city we would welcome those discussions.''

The Long Beach City Manager's Office issued a statement saying that if the Angels were interested in pursuing such an option, the city would "reengage in those discussion and seek direction from the City Council.''

The original Long Beach proposal called for the stadium to be built on a 13-acre lot, with additional acreage set aside to accommodate a commercial and residential development.

"Anaheim should never sell that property,'' Rep. Lou Correa, D-Santa Ana, told CNS. "If you're going to do anything, you lease, you don't sell.''

Selling the property cuts off a stream of revenue, Correa said.

"You're not Orange County in bankruptcy in 1994 where you have to sell everything at fire sale prices,'' Correa said. "That's not where Anaheim is at. Instead of the Angels buying the stadium, Anaheim should buy the Angels.''

Correa, along with Assemblyman Tom Daly, D-Anaheim, and Sen. Tom Umberg, D-Santa Ana, have sent letters to the city demanding more accountability on the proposed sale.

Umberg told CNS he agreed with Correa's suggestion of the city purchasing the team -- although there was no indication Moreno wants to sell the franchise.