Hundreds gathered in El Segundo to stand in solidarity with Armenia in its conflict with Azerbaijan over the disputed Nagorno-Karabakh region.
KABC 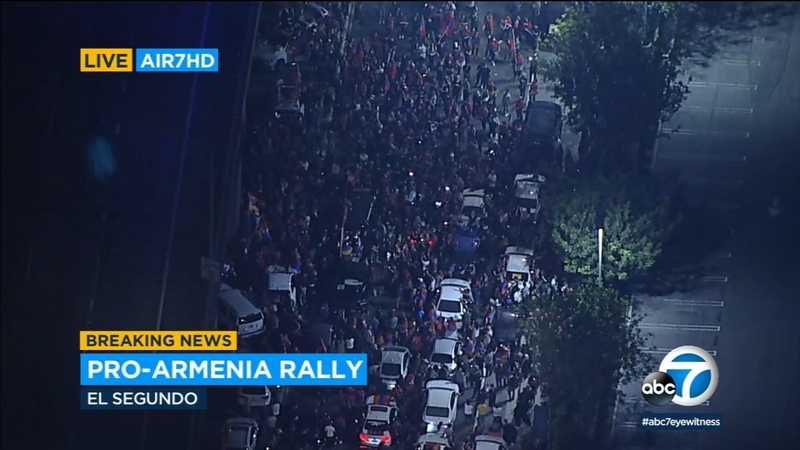 EL SEGUNDO, Calif. (KABC) -- Hundreds gathered in El Segundo Tuesday evening to stand in solidarity with Armenia in its conflict with Azerbaijan over the disputed Nagorno-Karabakh region.

Protesters were outside the Los Angeles Times office, with several waving Armenian flags and flooding the area of Imperial Highway between Douglas Street and Aviation Boulevard.

El Segundo police tweeted shortly before 6:30 p.m. that eastbound lanes of that portion of Imperial Highway were shut down.

The protest is the most recent after other demonstrations over the weekend, which included demonstrators blocking the 101 Freeway in Hollywood and the 170 Freeway in North Hollywood.

On Monday, hundreds took to the streets of Glendale for a peaceful protest.

Heavy fighting between Azerbaijani and Armenian forces in the region since Sept. 27 has killed scores of both servicemen and civilians. Both sides have accused each other of expanding the hostilities beyond Nagorno-Karabakh.

The clashes have continued despite numerous international calls for a cease-fire.

The region of Nagorno-Karabakh lies inside Azerbaijan but has been under the control of ethnic Armenian forces backed by Armenia since the end of a separatist war in 1994.