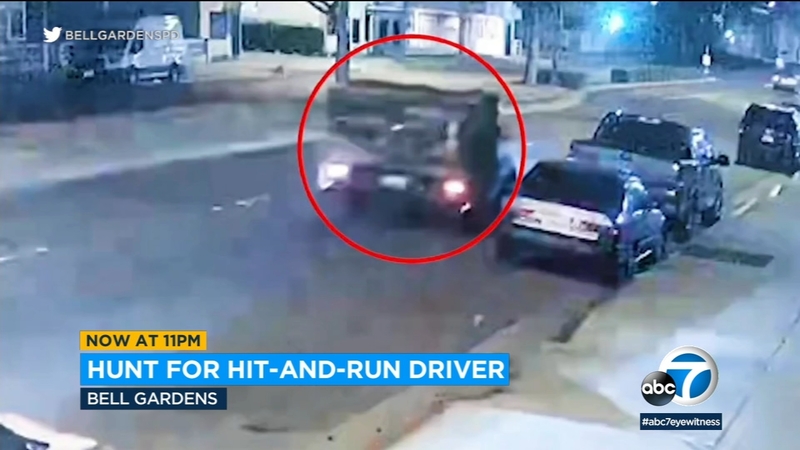 BELL GARDENS, Calif. (KABC) -- New surveillance video shows a truck striking a woman in the city of Bell Gardens and taking off without stopping, leaving her badly injured in the street. The victim's family said she's in the hospital fighting for her life.

"She's had intestinal damage. Her legs are broken. Her ribs are broken. We just got notice that she might go into a sixth surgery," said Erika Perez, the victim's cousin.

The Bell Gardens Police Department is asking the public to help identify the vehicle and the hit-and-run driver.
The hit-and-run happened Saturday, April 9 after 33-year-old Lisette Medrano left a friend's house on Eastern Avenue in Bell Gardens.

Police say Medrano walked from the sidewalk to the driver's side of her parked car.

A search is underway for a hit-and-run driver who struck and killed a pedestrian on the 405 Freeway in Westwood Monday night.

As she tried to open the door, a white pickup truck with a makeshift wooden bed crashed into her, sideswiped her car and hit a second, parked car.
Police say after the collision, the suspect's brake lights are seen briefly illuminated, indicating the suspect knew a collision occurred but made no attempt to stop to help the victim or contact police.

Police patrolling the area say they found Medrano lying on the street bleeding from her head of the 6300 block of Eastern Avenue at 1:44 a.m. She was conscious and transported to the hospital.

She is in critical condition.

"We just want everybody to share the videos as much as possible. We also put up a GoFundMe for the family," said Perez. "If the person that did this sees this just please come forward. We need justice for her," said Perez.