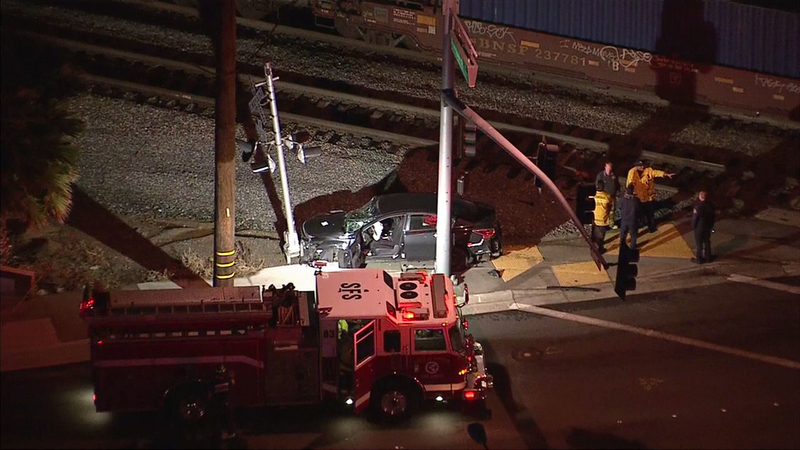 SANTA FE SPRINGS, Calif. (KABC) -- A freight train smashed into a car on the tracks in Santa Fe Springs Thursday night, and the woman inside was able to escape without injury.

The crash was caught on dashcam video by another driver who sent the footage using #abc7eyewitness.

Los Angeles County firefighters came across a car on the tracks at Marquardt and Rosecrans avenues shortly after 6 p.m. They contacted dispatchers, but before the train could be stopped, a BNSF freight train came barreling down the tracks.

"We are at Rosecrans and Marquardt. We have a vehicle trapped on the tracks. I need you to shut down the La Mirada Burlington Northern Railroad line through this area," a dispatcher said.

The train struck the vehicle, but no one was inside the car. Firefighters requested an ambulance as a precaution.

The result? The car was remarkably still largely intact, but it left a trail of parts across the intersection during its rough ride.

The driver, who by then was sitting in a nearby ambulance, was unharmed but shaken.

She told Eyewitness News she is a Thousand Oaks resident visiting a friend in the area. She meant to turn right onto the road, but accidentally drove onto the train tracks and got stuck -- something police said actually happens fairly often at the crossing.

The woman called 911, realizing she was stuck. The responding officers frantically tried to warn trains in the area but, clearly, they weren't able to get word out in time.

Train service for Metrolink and BNSF was temporarily delayed in the area, but resumed later after the wreckage of the vehicle was towed.