Video footage released on Thursday was from an officer's body worn camera as well as a dash camera.
KABC 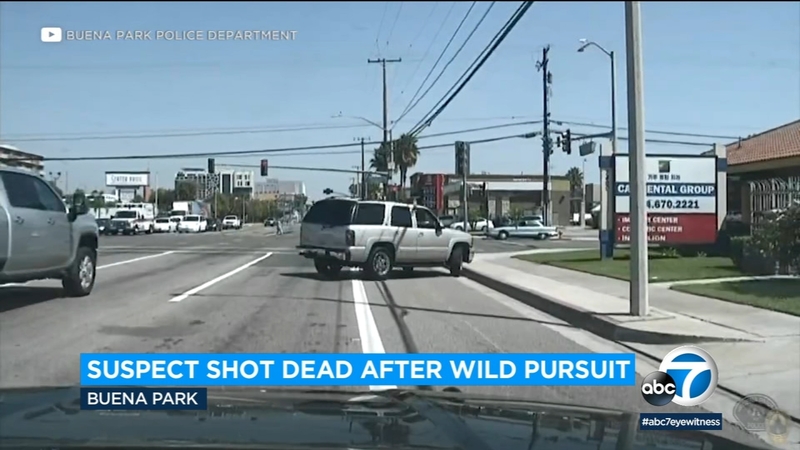 BUENA PARK, Calif. (KABC) -- Police released alarming new video Thursday of a dangerous chase in Buena Park that ended in a deadly shootout between officers and a gunman who shot at a school bus in an attempt to kill the driver - his estranged wife.

The incident happened Sept. 3 around 2 p.m. Police said an officer saw 60-year-old Compton resident Cedric Baxter fire at a school bus from his vehicle in the area of Orangethorpe Avenue and Western Avenue.

Only the driver and one student were on the bus. Police later determined the driver was Baxter's estranged wife. No one was struck when Baxter fired, police said.

The chase started after Baxter refused to pull over.

Dashcam video showed Baxter repeatedly ram into the school bus. During a portion of the video, you can see Baxter side-swiping the school bus near an intersection.

An armed suspect is dead after allegedly shooting at a school bus and engaging in a police chase that ended in gunfire, Buena Park police say.

The video shows him taking off, leading police on a chase that ended when Baxter pulled into a school district building parking lot and officers opened fire. Bodycam video shows Baxter and officers exchanging gunfire.

Baxter died at the scene.

"This could've been much worse," Buena Park PD Capt. Frank Nunes said at the time of the incident. "Fortunately, our officer was at the right place at the right time and intervened and possibly saved someone's life."

The release of these videos is standard after an officer-involved shooting or other critical incidents.

Police said Baxter was a parolee with a lengthy criminal history.

He had an active domestic violence restraining order out against him and shortly before that chase his parole had been revoked.