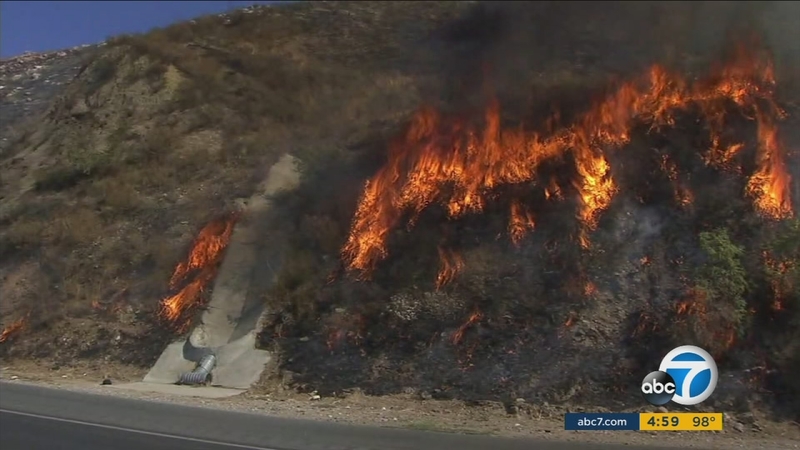 RANCHO PALOS VERDES, Calif. (KABC) -- A red flag warning was in effect across the Southland on Monday as Santa Ana winds conspired with low humidity and near-record-breaking temperatures.

Triple-digit heat was expected in Los Angeles and Orange Counties, along with the valleys and the Inland Empire.

In the wake of deadly wildfires in Northern California's wine country, Southland fire agencies are on high alert.

Those concerns were briefly stoked when a few small brush fires broke out around Southern California Monday before quickly being extinguished by firefighters.

An approximately 10-acre blaze ignited in some brush adjacent to a Moreno Valley neighborhood at the end of Parkland Avenue, scaring some residents who worried about their homes.

Winds in the area were low, and firefighters were able to get the blaze under control and extinguished quickly. No serious threat to homes was reported. The fire was, however, visible from as far as Colton and Redlands.

Earlier, a small brush fire broke out on a hillside in Rancho Palos Verdes on Monday morning. The blaze threatened nearby homes before firefighters stopped its forward progress.

That 1/4-acre fire began shortly after 11 a.m. near the 30900 block of Hawthorne Boulevard and made its way uphill.

Working in 90-degree heat, Los Angeles County firefighters doused the flames before they reached houses perched atop the 200-foot hill. There were no reports of injuries.
Also Monday, a brush fire in a remote area near San Jacinto grew to approximately 50 acres before firefighters stopped the forward progress of the blaze.

It was not clear if the blaze, which ignited near the intersection of Gilman Springs Road and Highway 79 around noon, was threatening any structures.

Some residents in the Sunland-Tujunga area were on edge following a small brush fire Sunday evening. Resident Sandy Nelson recalled seeing the flames as they moved up a hill.

"I saw the smoke last night and all the (fire) units came up," she said, "and I thought, 'Boy, this must be a big one,' because there were so many."

The fire was knocked down in less than 40 minutes by 52 firefighters, and its cause was under investigation. No injuries or structural damage was reported.