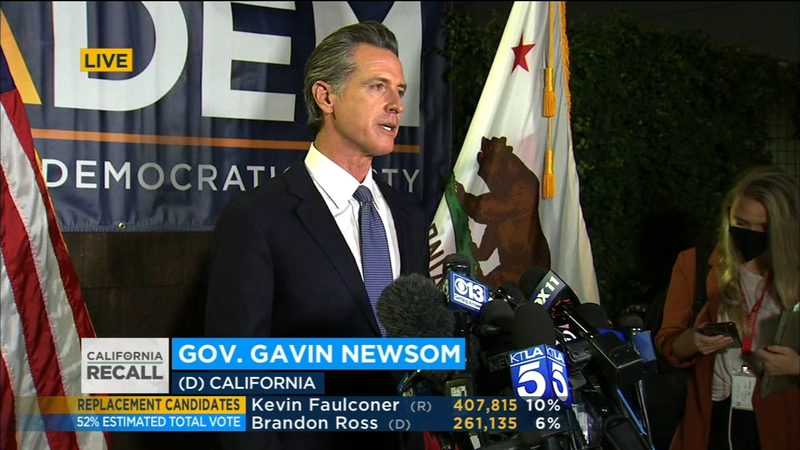 The recall election results are in and California voters have decided to let Gov. Gavin Newsom keep his job, rejecting the recall ballot measure by a substantial margin, ABC News is projecting.

Less than an hour after the polls closed, more than 58% of the votes had been tallied, and the "No" side on the recall was leading by roughly a 2-1 margin.

The polls for the recall election have officially closed and now the counting begins; however, those who were in line to vote at 7:59 p.m. will still have the opportunity to cast their ballot.

Election results begin to come in when polls close at 8 p.m.

The recall election results are expected to start to come in around 8:15 p.m. with Orange County starting to report their mail-in voting at 8:05 p.m.

Vote tabulators at the L.A. County vote tally operation center in Downey are already hard at work sorting all of the ballots, but they cannot begin tallying votes until polls officially close at 8 p.m. As of yesterday, 38% of mail-in ballots in the county had been received.

The large majority of the vote is going to come down to L.A. County. As a point of reference, when Gov. Newsom was elected four years ago, he won by 3 million votes, securing 62 percent in the election against opponent John Cox. If Newsom were to be recalled tonight, a lot would have to change in Los Angeles County where about a quarter of the state's vote lives and where a big portion of the vote for whoever wins tonight will come from.

Why is Gov. Newsom being recalled?

The recall petition was introduced in February 2020, before the COVID-19 pandemic took hold in California. The reasons stated on the recall petition don't actually have anything to do with Newsom's handling of coronavirus.

The petitioners' grievances include:

"Laws he endorsed favor foreign nationals, in our country illegally, over that of our own citizens. People in this state suffer the highest taxes in the nation, the highest homelessness rates, and the lowest quality of life as a result. He has imposed sanctuary state status and fails to enforce immigration laws. He unilaterally over-ruled the will of the people regarding the death penalty. He seeks to impose additional burdens on our state by the following; removing the protections of Proposition 13, rationing our water use, increasing taxes and restricting parental rights."

There's a lot to unpack there, from immigration to homelessness to property taxes. But things really picked up steam after the coronavirus pandemic.

Some critics say Newsom was too slow to reopen industries after the state crushed the curve in the spring of 2020. On the other side of the spectrum, some say Newsom wasn't strict enough with shutdown measures, which lacked enforcement or consequences for rulebreakers.

The lightning rod came in November 2020 when it was revealed that Newsom attended a birthday party at the Michelin-starred restaurant French Laundry. The gathering included people from several different households and took place in an enclosed area - the type of gathering Newsom had been telling Californians to avoid.

RELATED | How the recall election of Gov. Newsom came to be
EMBED More News Videos

A sitting California Governor has only ever been successfully recalled once. Will Gavin Newsom be the next? ABC7 anchor Liz Kreutz explains how the Golden State came to this rare politic point.

What's next in the recall effort?

More than 1.6 million Californians signed the recall petition - well over the 1.495 million verified signatures needed to trigger a recall election.

There was a period of time where people could withdraw their signatures from the petition. The deadline passed on June 8.

County elections officials had to report the withdrawn signatures to the state by June 22.

After that, since the signatures held, election officials had 30 days to come up with a budget, then there was another 30-day period for the legislature to review that cost estimate.

Only after that was the date for the election set.

When is the election and how will it work?

The date for the election was set for Sept. 14.

Californians will have the option to vote in person during the recall election or vote by mail. On the ballot, voters will be asked two separate questions. First, voters are asked if they want to recall Gov. Newsom, yes or no? If more than 50% of voters vote no, then Newsom stays in office.

In the second part of the ballot, voters are asked to pick a replacement in the event the recall passes. Voters will likely have a long list of people to choose from.

Who is running to replace Newsom?

Some prominent candidates include:

For the full list of names who have joined the fray, see the Secretary of State's website.

Newsom is not allowed to run as a replacement candidate.

Who is allowed to run in a recall?

There's also a filing fee and signature requirement. A person who wants to be on the ballot must pay nearly $4,000 ($3,916.12 to be exact) and gather at least 65 signatures. Gathering 7,000 signatures waves the filing fee entirely.

"Running in the California recall may be the best bargain there is in terms of seeking fame and fortune," Carla Marinucci, author of POLITICO's California Playbook, explained. "It only costs $4,000 to get on the ballot and that gets you and your message before 22 million California voters."

Like any typical election, we should know once all the ballots are counted.

If a recall does pass and a new governor is chosen, the Secretary of State will then certify the election. The new governor would take the oath of office and assume the position within the next 28 days.

If Newsom wins, he will remain in office at least through 2022. That is when he is up for reelection.

How much is this recall election going to cost?

How often has this happened in California?

Not very often. Governor Newsom is only the second governor in California history to face a recall election. The first was in 2003 with Gov. Gray Davis, who was successfully recalled and removed from office.

Newsom is only the fifth governor in U.S. history to face a recall election. The first was North Dakota's Lynn J. Frazier in 1921, who was successfully recalled.

How does this recall compare to 2003?

It's easy to want to draw comparisons between the recall in 2003 and the recall now. Both recalls gained steam due to crises facing the state. For Davis, it was the electricity crisis and frustration over rolling blackouts. For Newsom, it was the COVID-19 pandemic and his handling of the lockdown.

Both races have also seen celebrity candidates jump into the race. Although, perhaps none are as famous as former Gov. Arnold Schwarzenegger, who ran and won in 2003.

Which brings us to the differences - and there are some significant ones that Democrats hope will work to Newsom's advantage.

California has shifted dramatically since 2003. Republicans are no longer the second largest party in the state. They are now third following Democrats and No Party Preference.

There's also a difference in approval of the two governors. Davis had an approval rating lower than 30% during his recall election. A January survey from the Public Policy Institute of California showed Newsom's approval rating still at more than 50% support.

Download the ABC7 Los Angeles app on your iPhone or Android device and stream our coverage right from your phone.

Want to watch on the big screen? Just search "ABC7 Los Angeles" on your streaming device and download our free app for Roku, FireTV, AppleTV or AndroidTV - learn more here.