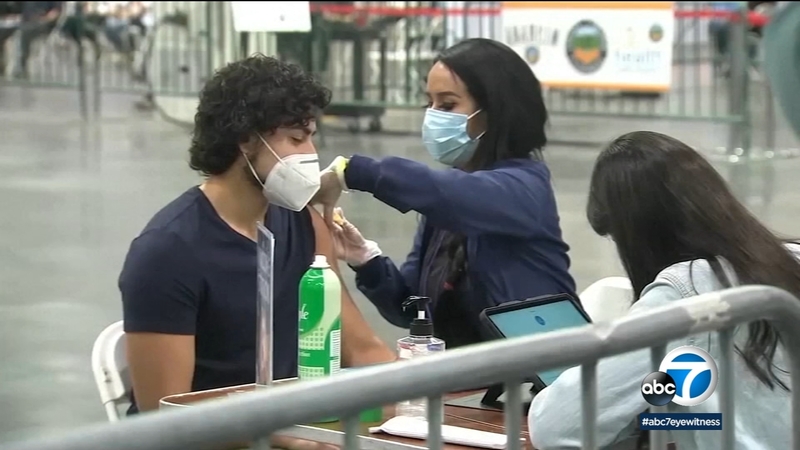 LOS ANGELES (KABC) -- As California moves to dramatically expand COVID-19 vaccine eligibility to everyone 16 and older by mid-April, officials anticipate a rush to book an appointment even as a shortage of supply persists.

A Los Angeles County health official Friday warned that getting an appointment for a shot will be initially difficult due to continued scarcity of vaccine supplies, but he said the situation will improve.

"We greatly look forward to this expansion, but want to remind everyone that its success will be dependent on receiving a substantial increase in vaccine supplies," said Dr. Paul Simon, chief science officer for the county Department of Public Health.

The vaccine eligibility expansion is based on the expectation there will be a significant increase in doses in the coming weeks. Newsom says there will be no limitations to get the vaccine, but there is still the limitation of supply.

The state expects to get approximately 2.5 million doses per week in the first half of April, and more than 3 million doses in the second half of the month.

L.A. County next week is actually set to receive its largely weekly allotment of vaccine to date -- 338,100 doses -- and tens of thousands more doses will be sent directly to other local vaccination providers, such as pharmacies and health care centers.

"There will undoubtedly be a rush come April 1," said Simon "... I want to make sure the public recognizes that there may be challenges to getting an appointment immediately. It just, again, reflects the limited supply of vaccine."

The expansion of vaccine eligibility comes amid a reopening of more businesses. California health officials also gave the green light to reopen state theme parks in most counties beginning April 1 as long as the county is not in the purple tier.

Los Angeles and Orange Counties are currently in the red tier, meaning when Disneyland, California Adventure, and Universal Studios open, they'll be limited to 15% capacity. Six Flags Magic Mountain in Santa Clarita is set to open to members and passholders at limited capacity on April 1 and 2, and to the general public on April 3.

Meanwhile, the Federal Emergency Management Agency says after administering half a million vaccinations, it plans to close its two sites in the state on April 11, including the Cal State L.A. site. The county is looking to use it.

"We recognize it's a really important site," Simon said. "We in no way want to scale back vaccination infrastructure."

At the Kedren Community Health Center in South L.A. Friday morning, a line snaked through the parking lot and moved outside the property, going on for several blocks

Kedren is also making sure vaccines don't go to waste. The clinics are using new vehicles to pick up expiring doses and then takes them door to door to homeless encampments and seniors in the area.