A captain says she was retaliated against after she refused to back up the sheriff's timeline on the case.
KABC
By Marc Brown and Lisa Bartley 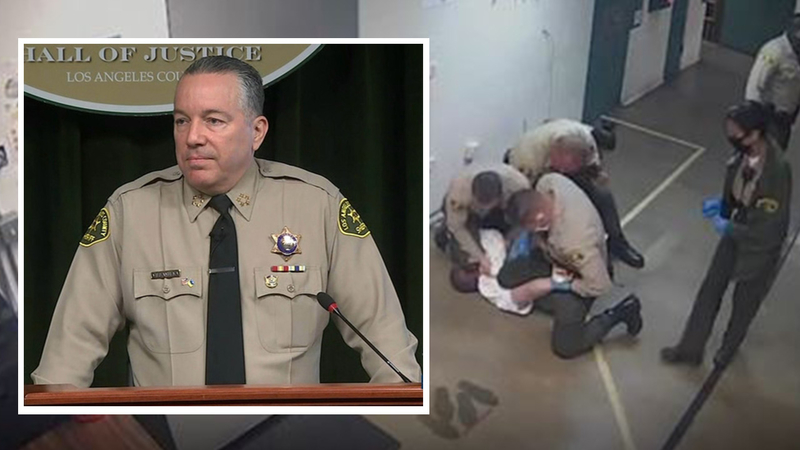 Now, she's a whistleblower and the fifth LASD executive to dispute Sheriff Alex Villanueva's claims about the case of a deputy who kneeled on a handcuffed inmate's head and neck for more than three minutes.

Walton is a 27-year veteran of the department.

In a new government claim, Walton said she was retaliated against after she refused to back up Villanueva's timeline on the controversial use of force case.

"His public statements are not the facts," Walton told Eyewitness News.

Villanueva has repeatedly stated that he did not see the video until Nov. 18, 2021, eight months after the incident.

The sheriff said he took action that same day to open the criminal case and order the deputy to be relieved of duty.

"The deputy has been relieved of duty and as you can see the flurry of activity happened once I became aware of the situation," Villanueva said during a press conference on March 29.

Walton claims Villanueva is not being truthful about when the criminal investigation was launched and that he is falsely taking credit for himself.

"It was actually November 18th," the sheriff said at the same press conference. "We saw the video and immediately, we ordered for the criminal investigation to be launched."

But Walton said, "I know that's not true."

In her legal claim, Walton said she is the one who realized back in late October that the case and the video had not been referred to the department's Internal Criminal Investigations Bureau, or ICIB.

"I looked at the video a couple of times and I just can't believe what I'm seeing," she said. "More importantly, I couldn't believe, I didn't understand, why ICIB didn't have this case."

She said after viewing the video in October as part of her role as a new captain of court services, she immediately contacted ICIB, sent them the video, and consulted with her superiors.

Emails independently obtained by Eyewitness News corroborate Walton's timeline, including that then-Chief LaJuana Haselrig approved the transfer of that investigation to ICIB on Nov. 10.

"November 18th, yes this is the important date," said Villanueva. "This is the date that I was shown the video, the internal criminal investigation was opened, that's a very important date. So, the question was why was it not launched at any point prior to November 18th?"

Walton, however, has questions.

In her claim, Walton also states that in April 2022, she was asked by the now newly-promoted Chief Joe Williams for her timeline of events.

Days later, Walton - who is out on medical leave - said she was removed from her position.

Walton is the fourth current or former LASD executive to file a claim related to the cover-up of this use of force incident.

Former Assistant Sheriff Robin Limon said in her claim that she showed the video to Villanueva, Undersheriff Tim Murakami and Capt. Anthony Blanchard in March 2021, approximately five days after the incident.

Another L.A. County Sheriff's Department official is on the record claiming Sheriff Alex Villanueva directed a cover-up of a controversial case and video that shows a deputy kneeling on the head and neck of a jail inmate.

Limon said that after viewing the video, Villanueva said, "we do not need bad media at this time" and that he'd "handle the matter."

Villanueva, Murakami and Blanchard have all strongly denied seeing the video back in March 2021.

Los Angeles County Inspector General Max Huntsman has issued subpoenas demanding that Villanueva, Murakami and Blanchard all testify under oath about this case.

The sheriff's department declined ABC7's request for an interview with Villanueva and would not officially comment on this case because they say it involves multiple active investigations.