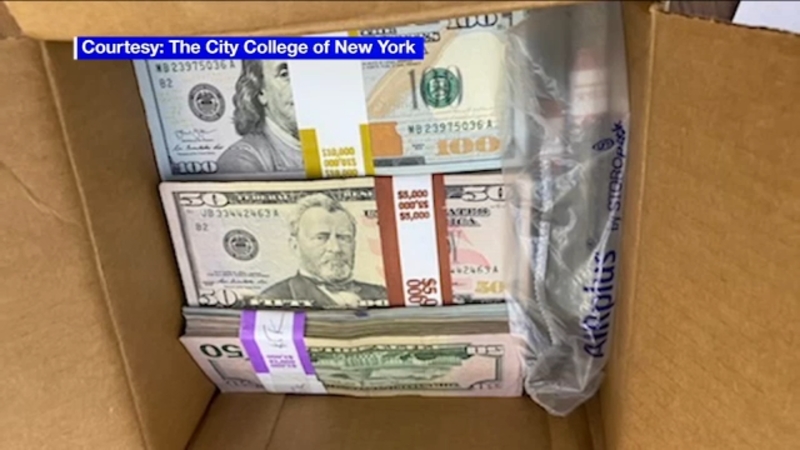 NEW YORK CITY -- A surprise box full of cash showed up at the City College of New York, and while the sender remains a mystery, the man who found it is determined to use it to help others.

"I'd never seen this kind of money before in my life, in a box, in cash, except for in movies," said City College Physics Chair Vinod Menon, Ph.D.

"There was bubble wrap, I opened the bubble wrap and there was all this money," Menon said. "So I closed the thing up, held it on my chest, called up the dean."

Menon had not been in his City College classroom since March 2020.

When the physics department chair finally returned in September, there it was -- a cardboard box mailed in November of last year, full of cash.

The return address lists Kyle Paisley from Pensacola, Florida. But a person by that name at that home does not exist.

Menon has no idea where the box came from, but said it's possible it was a student.

"I don't know the answer to that," he said. "It's clearly someone who benefitted from being here. It's somebody who did a undergraduate and master's degree."

A three-paragraph letter inside the box had a few clues about the donor's identity, saying:

"Assuming that you are a bit curious as to why I'm doing this... the excellent opportunity available to me..." that led to "a long, productive, immensely rewarding to me, scientific career."

"If the person doesn't want to come forward, I respect their decision to do so, but what I will in my capacity to do, is to what the person wants us to do, which is move it forward, give it to the deserving students," Menon said.

First the letter and cash had to be turned over to the FBI. Then the board of trustees had to vote to approve the fiscal gift.

Now the physics and math department have decided to award two full undergraduate tuition scholarships - which is $7,500 - for the next 12 years.

"It is wonderful in so many ways, it still shows that, it's all good, everything is good," Menon said.

The Webb Schools in Claremont received a $100 million donation from an anonymous donor, the largest gift ever made to an independent high school west of the Mississippi, officials announced.