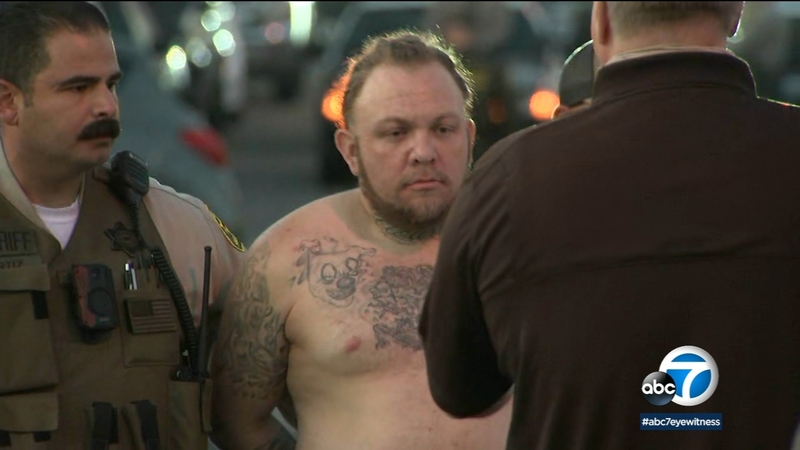 EAST LOS ANGELES (KABC) -- A man and his father were arrested early Thursday morning at a home in East Los Angeles in connection with three separate murders that date back as far as 2014, authorities said.

A Los Angeles County Sheriff's Department SWAT team descended on a residence about 4:30 a.m. and took Anthony Velasquez, 31, into custody. His father, 51-year-old Manuel Velasquez, was arrested as a suspected accessory to the crimes.

News video from the scene showed deputies placing a shirtless Anthony Velasquez into a patrol vehicle after he was apprehended. He was booked on suspicion of murder and was being held on $2 million bail, authorities said. Manuel Velasquez was in the process of being booked and charged.

"It's a big milestone," sheriff's Lt. Hugo Reynaga told ABC7 on Thursday, referring to the arrests. "I don't know at this point, but we may be able to tie these two to other local murders, also cold cases."

"In addition, we're just happy to provide the families of these three victims some kind of assurance that justice is going to be served," the lieutenant said.

Maria Orozco, Avalos' sister, said she and her family thought they would never receive the call from detectives that his killers were caught.

"It meant relief and I thought of my brother, that's he's somewhere in heaven right now celebrating and that he's happy that justice was made and that they will not hurt anyone anymore," she said.

Anyone with information about the killings or the suspects is urged to contact the sheriff's Homicide Bureau at (323) 890-5500.