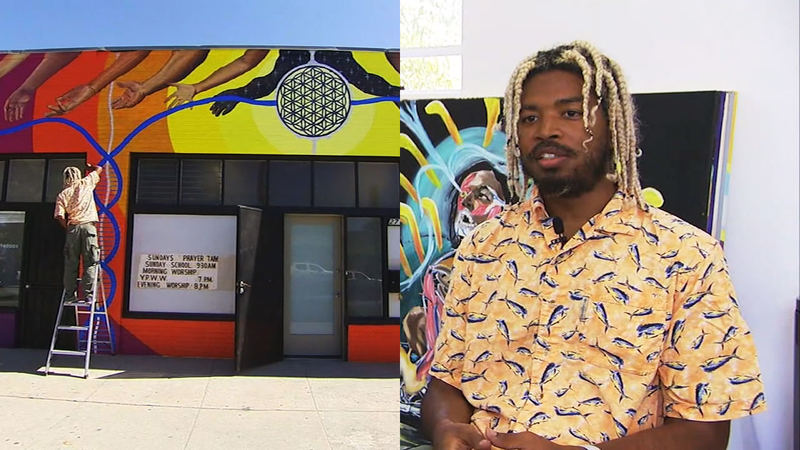 LOS ANGELES (KABC) -- Dezmond, who goes by Dezmundo, is a visual artist from Los Angeles who works in multiple painting mediums.

He's dedicated his talent to create wearable works of art for our Feed SoCal food drive.

"To have my work be a part of the Feed SoCal campaign, for me, it kind of helped to serve this idea that I can be of service to the community, simply by creating something beautiful and inspiring."

Dezmundo added, "The t-shirt design is based off of a mural that I did off of 57th Street. The idea was that because the mural was horizontally oriented, I wanted something that was more augmented to better fit a t-shirt."

"Instead of like having it be linear, my idea is that I would wrap it instead and enclose it within a circle. It's this multitude of hands reaching out, and they're all carrying these DNA strands, so to speak."

"That's bringing to attention the notion that we all sort of share this common ancestry, no matter what the shade, or hue or color."

Dezmundo continued, "At the center of the design is what's called the flower of life. It's a pretty well known, sacred geometric figure that is found throughout the world in many of the ancient cultures."

"I think it's great and it's an honor that my t-shirt design is going to be a part of the Feed SoCal food drive, because if I can contribute something to that, I think that's something worth doing."

ABC7 will donate 100% of its proceeds from the sale of the exclusive Dezmundo-designed t-shirt to support our 10th annual Feed SoCal campaign.