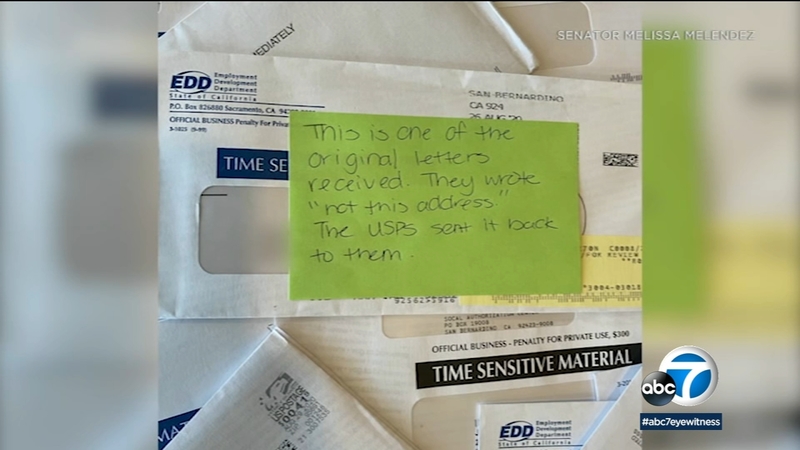 All of the letters were sent to the Riverside home of Thomas Dawson. He says he didn't apply for unemployment benefits and worries about those who did and are still waiting.

"They say urgent. You can feel a debit card in there," Dawson said as he showed ABC7 one of the letters.

Dawson says he tried to return the letters with no luck, so he turned them over to his state Senator Melissa Melendez who represents the 28th District.

Melendez says another constituent also contacted her with the same problem.

"He said 'I got 22 last week, I got 13 just the other day, don't know why.' And we're hearing more and more, so something is going on," said. Sen. Melendez who represents the 28th District.

"It's extraordinarily unfortunate that fraud has increased during this pandemic."

It says it is investigating and "...developing methods to stop and prevent such claims from being paid, and prosecuting the unscrupulous offenders to the fullest extent of the law."

"I know EDD is suggesting it's all part of a fraud scheme, and some of it is I'm sure is, but I think we still need to look at EDD to find out what's going on within their system," said Melendez.

Melendez called for an independent audit. She says the request was denied.

"I do hope this gets resolved and the people that need their money, and need their paperwork so they can get their files done, gets taken care of," said Dawson.

EDD says it has fraud information on its website and encourages people who receive such mail to report it right away to EDD.

Melendez says she's been trying to reach EDD to find out what to do with the letters. So far, she says no response.

The California EDD said that they're in an active nationwide investigation regarding identity theft and fraudulent claims.