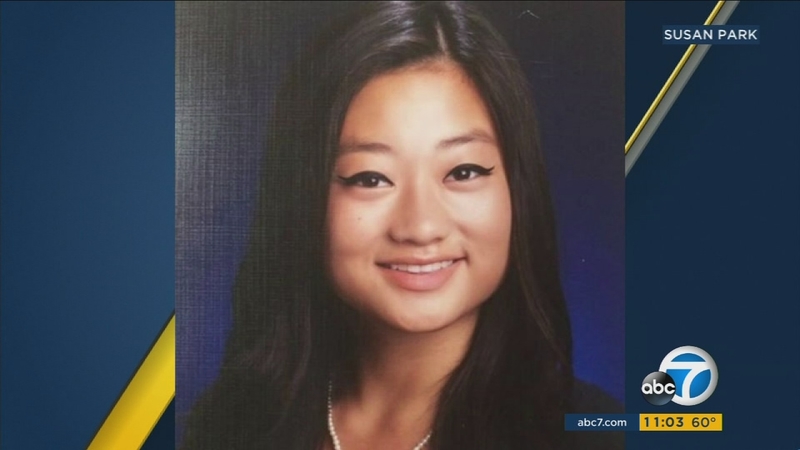 GLENDALE, Calif. (KABC) -- The family of a Glendale woman who has been missing since January hope the public can help find her or figure out what happened to her.

Susan Park and her friend scanned security video Tuesday night, which showed images of Park's daughter, Elaine. She was last seen shortly after 6 a.m. on Jan. 28 as she headed to her car at her former boyfriend's Calabasas home.

"I had this off feeling because she didn't text back. She was just not responding to anything and her phone was off," Park said.

The 20-year-old never returned to her mother's house. Her car was found five days later along the Pacific Coast Highway in Malibu. Authorities found cash, her laptop and cellphone inside.

Several searches for Elaine have turned up empty. Park reached out to Elaine's former boyfriend Divine, or "Div," Compere.

"I asked him that as a mom, I really want to see a last image of her," Park said.

Park said Div's mother provided the surveillance video. It shows Div and Elaine leave in an Uber to see a movie the night before she disappeared. The video captures them returning home just after 1 a.m.

"He said that at that time, at 4 o'clock in the morning, she all of the sudden got up shaking and singing, and it looked like a panic attack," Park said.

Park said Div told her Elaine then changed and left the house. But Park said her daughter didn't look distressed or panicked in the video. The footage shows Elaine walking outside, but for some reason the video stops at 6:05 a.m.

Her car is shown leaving the gated community, but it's too dark to see the driver.

Park said her daughter experimented with drugs in the past, and she learned this after reading Elaine's old text messages. It's unclear if drugs were involved before she disappeared.

A $5,000 reward is being offered in the hopes of getting answers to what happened to Elaine.

"Please come home safe because I love you a lot," Park said.

Eyewitness News reached out to Div and his family, who said they have no comment. Glendale police said the family has cooperated fully in the investigation and do not believe he or anyone at the property were involved in Elaine's disappearance.

Authorities said they continue to treat the case as a missing person's investigation as there is no reason to suspect foul play at this time.