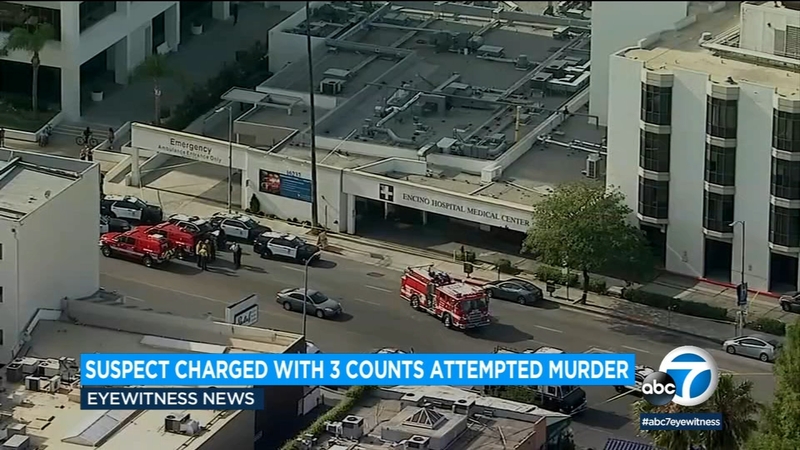 ENCINO, LOS ANGELES (CNS) -- A man who allegedly stabbed a doctor and two nurses at Encino Hospital Medical Center and then barricaded himself in a hospital room for more than four hours last week was charged Tuesday with three counts of attempted murder.

Ashkan Amirsoleymani -- whose last name is listed in the criminal complaint as Asmirsoleymani -- was set to be arraigned Tuesday in a Van Nuys courtroom in connection with the alleged attack last Friday.

The complaint includes allegations that the 35-year-old man used a knife and that he has five prior convictions dating back to 2008 for crimes including assault by means likely to cause great bodily injury and assault with a deadly weapon.

Police were called to an area near the hospital in the 16200 block of Ventura Boulevard on reports of a possible collision at 3 p.m. Friday, according to Deputy Chief Alan Hamilton of the Los Angeles Police Department.

Responding units discovered that no collision occurred, but learned that a person who was "involved in the potential traffic collision" had entered the hospital, Hamilton said. An investigation yielded no evidence of a crime.

LAPD officers were again called to the area at about 3:50 p.m. on reports of an assault with a deadly weapon suspect armed with a knife inside the hospital.

A doctor and two nurses were seriously injured after they were stabbed inside the Encino Hospital Medical Center, according to authorities.

According to the LAPD, one doctor and two nurses were stabbed. All three were removed from the hospital and taken by ambulance to Dignity Health Northridge Hospital Medical Center. Two of the victims were later treated and released and the third remained in the hospital in "fair but stable condition," a spokesperson for the hospital confirmed.

A large contingent of police and firefighters descended on the scene, including a SWAT team, and amassed in the street outside the hospital. The suspect remained barricaded inside the hospital as evening fell, and police evacuated the first floor of the hospital and adjacent offices.

The LAPD confirmed at about 8:15 p.m. that SWAT units managed to apprehend the suspect.

The suspect had walked into the hospital and was attempting to seek treatment, although the reason was unknown, police said.

The Los Angeles Times reported that two workers leaving a nearby dental office saw one of the victims, a male nurse, wandering outside the hospital with blood on his scrubs.

"His guts were out," one of the workers said. "He had a pretty bad slash."

The two workers helped get towels from the hospital's reception area to control the bleeding for the nurse and a female doctor inside who had also been stabbed and was bleeding badly.

"There was blood all over the floor, blood in the rooms, blood on the gurney the doctor was laying on," the worker told The Times. "It was a bloodbath."

The newspaper reported that the workers, another nurse and a security guard trapped the suspect in a storage room by holding the door closed until SWAT personnel arrived.

One of the workers told The Times that the man later identified as Amirsoleymani had a small black dog with him when he entered the hospital, but a nurse picked it up at some point during the attacks.

An officer at the scene told reporters that the suspect's identity was known to authorities, that he has had several previous run-ins with police and has been arrested twice in the past for assaulting officers. His most recent arrest occurred last year, police said.