Feed SoCal food drive: Helping those in need is a family affair for artist Eric Michael 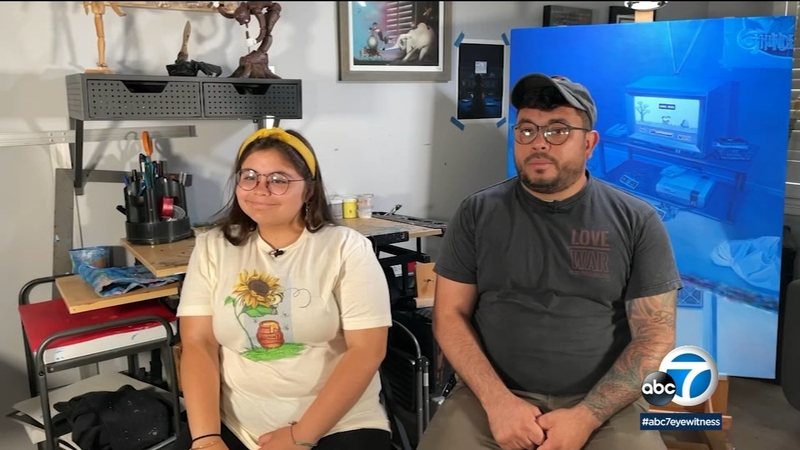 LONG BEACH, Calif. (KABC) -- Eric Michael Rauseo was born in Venezuela and always loved to draw as a kid.

"Being an immigrant kid coming to United States, pursuing an art career back in the 90s wasn't necessarily something that was feasible," Eric stated.

"I felt hypocritical, telling my daughter to pursue her dreams and go after what she wants to do in life, and here I was working at a bank, not really following my dreams myself."

"So I decided to go back to art school, to get the basic knowledge of what I needed to do to take art as a career."

"And now that's all I do...literally just paint Monday through Thursday at a studio, and Saturday through Sunday on my own."

"So I'm a living example for her to do whatever you need to do to make work so that you can follow your dreams and make them happen."

Eric continued, "I wasn't sure what to do for the Feed SoCal design, so I asked her what she would do, based on the entire premise. So she came up with the concept for the shirt that you see, and we kind of collaborated on it."

Eric's daughter, Kayleen, added, "The flowers came into mind. Then thought that bees pollinate flowers. The bees are the pollinators of the entire ecosystem."

"They're all about togetherness, and that's what the whole project is about: working together in order to provide food for those who don't have the resources to get it."

"And I was like, 'hey, that's actually pretty good!' So I told my dad, and in school that very day I just started drawing a bunch of bees, and I gave the pictures to him and he ended up making this shirt."

Eric said, "I've been around poverty for longer than I would want to be. So seeing the struggle that people undergo, that's something that's always been instilled in me through my family."

Eric's family owns La Bocca Felice restaurant in San Pedro. "When the pandemic happened, we were made aware, obviously, that there was a lot of people in the nearby community that were unable to obtain food."

Eric's brother, Nima, mentioned, "Me and Eric and Luis...we had a patio in the back of the restaurant, we decided to change that patio to an outdoor kitchen and start making food and packaging it up."

"We started a collaboration with different organizations, and we managed to donate around 4,800 dishes in the first year of the pandemic."

Nima added about Eric, "Seeing that he takes these necessary steps doesn't even surprise me at all. It is him as a person. A giving person and a wonderful human being."

"Being able to be part of this project, which allows me through my artwork be able to provide a way to help someone who was in need, it's something...you couldn't ask for more," stated Eric.

Kayleen said, "The fact that I get to draw, which is something I love, while also helping people is something that makes me really happy."

ABC7 will donate 100% of its proceeds from the sale of the exclusive Eric Michael and Kayleen-designed T-shirt to support our 11th annual Feed SoCal campaign.