Eye on L.A. explores foods 1st made in the city 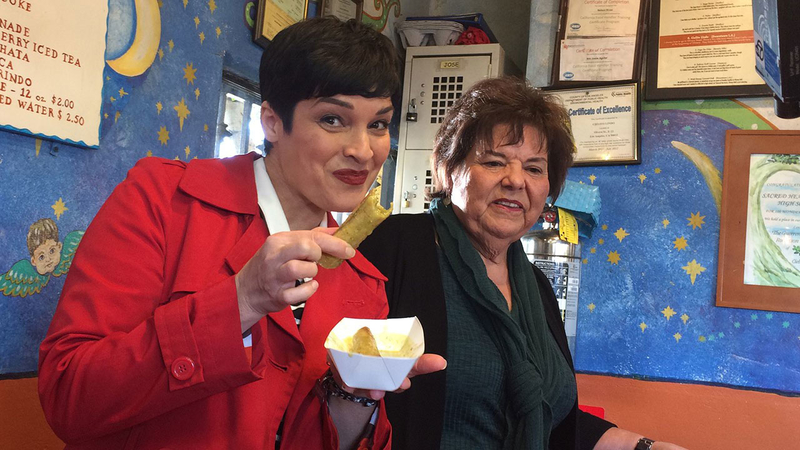 Eye on L.A. explores foods 1st made in the city

LOS ANGELES (KABC) -- This week, Eye on L.A. explores the stories behind some of America's favorite food dishes and drinks that were first made right in Los Angeles.

NEIL SAAVEDRA - THE FORK REPORT
We brought in Eye on L.A. pal and food expert Neil Saavedra, radio host of the Fork Report, to guide our pallets on this tasteful journey. You can tune into the Fork Report on KFI AM 640 every Saturday from 2pm-5pm, to hear chef interviews, food news, pop culture, recipes, cooking tips and tricks, hot eateries and establishments and much more. Whether vegan or carnivore, all are welcome to join the conversation, expand and share their knowledge about everyone's favorite subject, food!
http://kfiam640.iheart.com/onair/fork-report-46274/

THE BEEF: COLES VS. PHILLIPE'S FRENCH DIP SANDWICH
What's the beef between Los Angele's restaurants Cole's and Philippe the Original? Both restaurants, opened in 1908, claim to be "the originator" of the French Dip Sandwich. At both of these restaurants, the roll is dipped in the hot beef juices before the sandwich is assembled, and is served "wet". The sandwich can also be requested "double dipped" at either establishment. Try them both and be the judge yourself!
http://www.philippes.com/
http://213hospitality.com/project/coles/

HOT DOG ON A STICK - THE CORN DOG
We visited the birth place of the iconic Hot Dog on a Stick located in Santa Monica. Started in 1946, founder Dave Barham, using his mom's cornbread recipe, created the now famous corndog. Known as Hotdoggers, employees on Hot Dog on a Stick, stand out in their red, white, blue and yellow uniforms. It's hard not to smile when enjoying a crispy Hot Dog on a Stick and a fresh lemonade served by the happiest Hotdoggers around!
http://hotdogonastick.com

CIELITO LINDO - THE TAQUITO
We visited Susanna MacManus, co-owner of Cielito Lindo, and granddaughter of Aurora Guerrero, the founder and inventor of the taquito. Located on Olvera Street in Los Angeles, Guerrero's daughter used her taquito recipe to open a chain of restaurants in Los Angeles. This family owned business has been carried on by each new generation of Guerrero women. The taquitos, shredded beef rolled in a corn tortilla and fried are made fresh to order, then served drenched in a secret family recipe avocado sauce.
http://cielitolindo.org/

THE CALIFORNIA ROLL
In the late 1960s, sushi chef, Ichiro Mashita is considered to be the first to create the California Roll while working at the Tokyo Kaikan restaurant in downtown's Little Tokyo. Traditionally sushi rolls are wrapped with nori on the outside but Mashita recognized that American's pallets were unaccustomed to the chewy outside, and so he flipped it, putting the nori on the inside of the roll and the sticky rice on the outside. Additionally, he substituted toro (a fatty tuna) with avocado which had a similar consistency and worked well along with crab and cucumber in the roll. We stopped by the popular Sushi House in Studio City where the Cali Roll is always a big seller.
http://www.sushihse.com/

L.A. BORN SALADS - THE COBB AND THE CHINESE CHICKEN SALAD
We went to The Farm of Beverly Hills to learn the history of the Cobb Salad and why it is so popular here in LA. We spoke with Chef Hector Ambriz who explained that the salad was invented at the now defunct Brown Derby restaurant. Comprised of Romaine lettuce, avocado, bacon, blue cheese, egg, chicken and dressing, the salad is a favorite among guests here for its simplicity yet richness in flavor. But the Cobb isn't the only salad with origins in Los Angeles, to learn more about the Chinese Chicken Salad, we visited Joan's on Third and spoke with owner Joan McNamara about her version of this iconic salad. The salad is comprised of shredded Iceberg lettuce, crunchy wonton sticks, battered fried chicken, toasted almonds and a tangy dressing. For a healthier option, guests may ask for grilled chicken instead of the fried, yet the original recipe calls for fried chicken.
http://www.thefarmofbeverlyhills.com/
http://www.joansonthird.com/

KOGI SHORT RIB TACO
L.A. can't get enough of Chef Roy Choi's signature Short Rib Taco, served at Kogi Taqueria food trucks here in Los Angeles. In 2008, Roy Choi and a friend Mark Mangeurs came up with the Korean short rib taco after a hard day's night of celebration. After roaming the aisle of Koreatown's Gaju market and grabbing items at random, such as kimchi and a cabbage slaw with soy-sesame chili, they took a bite and realized they had created something special. Today the tacos are served with caramelized Korean BBQ short rib, Mexican chilies, cilantro-lime-onion relish and soy Kogi slaw.
http://kogibbq.com/

THE SMOKED SALMON PIZZA
We visited the famous Wolfgang Puck restaurant, Spago to learn the history behind their famous decadent dish, the smoked salmon pizza. In 1982 chef Wolfgang Puck opened the original Spago on the Sunset Strip in West Hollywood, and their signature dish was created when the kitchen ran out of brioche. Quick thinking Puck put his smoked salmon on a pizza crust and everyone loved it. You can now enjoy this pizza with its smoked salmon, chili, garlic oil, red onion, dill crme fraiche and chives at Spago's new location in Beverly Hills.
https://wolfgangpuck.com/#restaurants

TUNA TARTARE
We traveled to Chaya in downtown L.A. to get the scoop on this Japanese restaurant, known for inventing Tuna Tartare. In 1984, executive chef Shigefumi Tachibe was dealt the task of appeasing a group of guests. According to the lore, the group ordered the beef tatare, but one of them didn't like beef. Chef Tachibe stepped in and diced raw tuna instead, adding olive oil, Dijon mustard, sweet pickels, onion, tarragon, chives, green peppercorns, fresh lemon juice, salt, pepper and served it with sliced avocado and a lemon wedge. The dish was an instant success, and continues to delights guests throughout the world. You can enjoy this original recipe during dinner at Chaya Downtown L.A. or with a hit of wasabi at Chaya Venice.
http://www.thechaya.com/

L.A. MADE DRINKS
Perhaps the most famous drink born in Los Angeles is the Moscow Mule. Created in 1941 by Jack Morgan, owner of the Cock 'n' Bull restaurant on Sunset Boulevard, this refreshing cocktail has taken Los Angeles by storm. Since the Cock 'n' Bull is no longer around, we headed to Tam O'Shanter in Los Feliz, where they make one of the best Moscow Mules in town. We were also shocked to learn that one of Tam's most popular drinks is the first L.A. born, "mocktail" - the Shirley Temple! This non-alcoholic cocktail can be attributed to the young starlet who was out to eat with her parent's one night and as the story goes, was upset that she could not drink Old Fashions like her parents. The wait staff mixed together a virgin version for her, and thus the drink was born. Both Chasen's and Brown Derby Restaurant lay claim to the original creation.
http://www.lawrysonline.com/tam-oshanter

THE ZOMBIE
In 1934, Don the Beachcomber opened Beachcomber Café in Hollywood and began serving tropical inspired cocktails. His famous Zombie cocktail was created when a guest asked for something to help him get through his business meeting. Upon drinking the rum concoction that Beachcomber created the guest relayed that he was able to make it through his meeting but felt "like a zombie", and thus the cocktail was born!
http://www.donthebeachcomber.com/

THE HOT FUDGE SUNDAE
Hollywood Blvd. is not only known for its Walk of Fame, but it's also the birth place of the Hot Fudge Sundae. Just across from the Roosevelt Hotel you'll find a commemorative banner which is all that's left of C.C. Brown's ice cream shop, a popular spot for early 20th century ice cream lovers and birth place of the Hot Fudge Sundae. The establishment, closed in 1966 has since been converted into one of the many souvenir shops lining the street, but the creation lives on in ice cream shops everywhere.

DONUT MAN - STRAWBERRY DONUTS
Cruise down Route 66 to Glendora and you'll find the Donut Man, home of the famous strawberry doughnut. Owner Jim Makano explained how this culinary treat was created by accident when a strawberry grower and friend was over stocked on strawberries. Makano agreed to buy the excess berries and created what is now his most popular doughnut. Available in season, roughly January through July, the donut is overflowing with large, ripe strawberries and smothered in a signature glaze. They are open 24 hours a day but expect lines on Friday and Saturday nights.
http://www.thedonutmanca.com/