New body-camera footage details the interactions between George Floyd and the Minneapolis police officers involved in his fatal arrest.
KABC
By ABC7.com staff 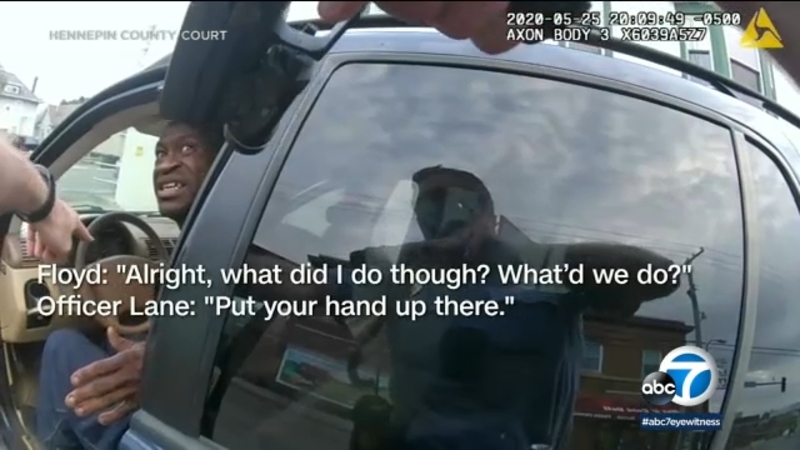 It reveals how the encounter between Floyd and police quickly escalated leading to the killing.

The footage shows the encounter between Floyd and police begin with an officer tapping on his vehicle window.

It appears to startle him.

The officer repeatedly asks Floyd to show his hands. Floyd seems distraught and only one hand appears visible to the body camera as he asks the officer what he did.

He says he has been shot before. He begins to cry.

The officers pull Floyd from the car. He struggles as the two officers try to handcuff him.

George Floyd's family filed a lawsuit against the city of Minneapolis and the four police officers charged in his death, alleging the officers violated Floyd's rights when they restrained him and that the city allowed a culture of excessive force, racism and impunity to flourish in its police force.

The public has seen some of this video, in addition to footage taken by a bystander. But now they can hear the tone of frustration in the officers' voices as well as the desperation in Floyd's own statements.

The officers take Floyd across the street as he continues to cry. Another struggle ensues as they try to get him into the squad car.

The struggle continues for some time. Eventually it ends in Officer Derek Chauvin placing his knee on Floyd's neck for an extended period of time in the footage that has now become infamous.

When Chauvin's knee has been on Floyd's neck for about a minute, another officer, Thomas Lane, is heard asking whether Floyd should be moved.

He asks a second time a few minutes later.

Chauvin replies: "No, he's staying where we got him."

Lane says: "OK, I am just worried about excited delirium or whatever."

Chauvin replies: "Well, that's why we got the ambulance coming."

But the ambulance was of no use. Floyd lost consciousness and was pronounced dead at the hospital.

Lane's attorneys are seizing on the officer's statements in the video in an effort to exonerate him in Floyd's death.

On Tuesday, state prosecutors opposed a motion by Lane's attorneys to dismiss him from the case.

The defense argues that he was just a rookie overridden by a senior officer at the scene.