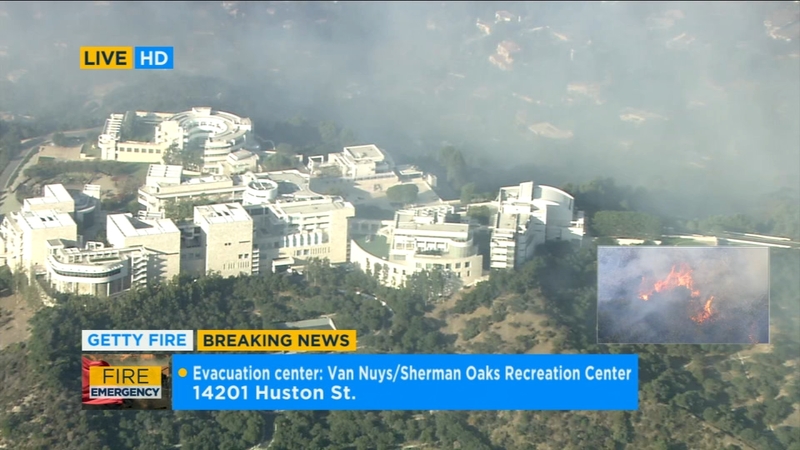 LOS ANGELES (KABC) -- The Getty Center is packed with priceless art, but the top risk concern for the facility is not theft - it's fire.

"Logically you'd think it'd be something like Danny Ocean stealing art or something like that, but what it turned out to be was fire," security and risk management expert Hal Kempfer told ABC7 after the Getty Center fire erupted Monday. "Wildland fire and brush fire was their biggest risk, and the entire center was designed with that in mind."

Kempfer said the Getty Center was designed to be fire resistant. The anti-fire elements include the materials used to construct the museum, the way the eaves were built and how the landscaping was designed, he said.

Photos of Getty, 8am PT. #GettyCenter and #GettyVilla remain safe from #GettyFire to the north.

Many have asked about the art—it is protected by state-of-the-art technology. The safest place for the art and library collections is inside.

Thank you to @LAFD for ongoing response. pic.twitter.com/6Qa4youAhW

"It's a rather interesting, structural anomaly in Southern California, that it was designed with fire in mind," Kempfer said.

"He was very up front and he said fire is our biggest risk," he said, adding that the biggest fear was that a fire would get into the center and the art work would be destroyed in the flames.

The Getty Fire ignited along the Sepulveda Pass Monday. The wind-driven blaze spread quickly and destroyed multiple homes. However, its flames did not reach the Getty Center. Click here for the latest on the Getty Fire.

Related stories:
Lebron James, Arnold Schwarzenegger among the thousands forced to evacuate due to Getty Fire