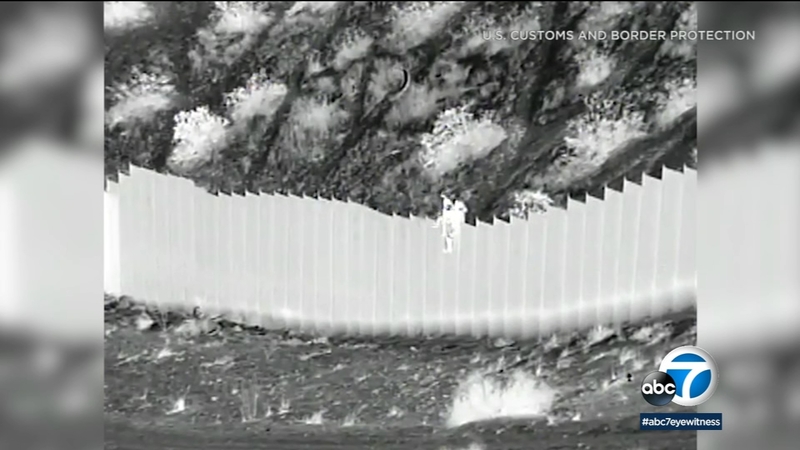 MOUNT CRISTO REY, N.M. -- Disturbing new video shows smugglers dropping two toddler sisters from atop a 14-foot-high barrier at the U.S.-Mexico border in New Mexico - and then abandoning them.

According to the agency, one of the suspects dropped the Ecuadoran children, ages 3 and 5, then both smugglers fled the scene on foot and "abandoned the helpless little girls on the north side of the international boundary line."

The camera operator notified fellow agents and directed them to the remote location, where they found the young sisters and rendered aid. Both girls were alert when the agents located them, officials said.

The children were transported to the Santa Teresa Border Patrol Station for evaluation, then to a hospital as a precaution. They were medically cleared and remained in temporary custody of the agency, pending placement by the Department of Health and Human Services.

"Please give dignity to the people. Please respect the people, the rules." Press play to watch exclusive video of Ted Cruz being blocked by a woman he identified as a Biden staffer while trying to record from inside a migrant facility.

"I'm appalled by the way these smugglers viciously dropped innocent children from a 14-foot border barrier last night. If not for the vigilance of our Agents using mobile technology, these two tender-aged siblings would have been exposed to the harsh elements of desert environment for hours," said Chief Patrol Agent Gloria I. Chavez of the Border Patrol's El Paso sector. "We are currently working with our law enforcement partners in Mexico and attempting to identify these ruthless human smugglers so as to hold them accountable to the fullest extent of the law."