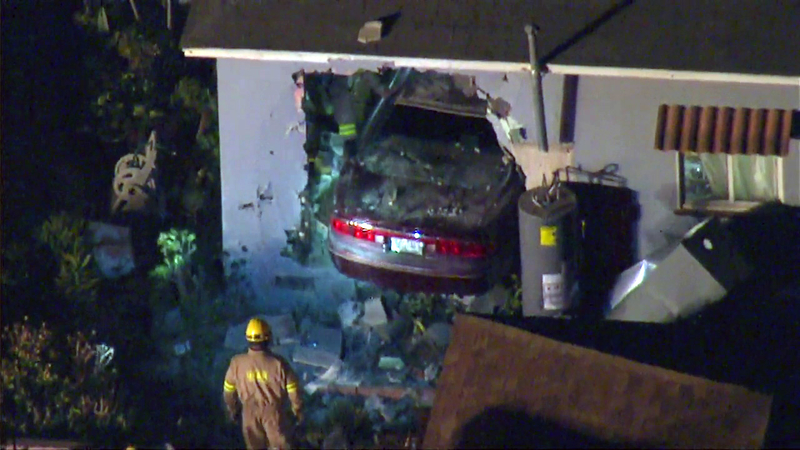 HARBOR GATEWAY, LOS ANGELES (KABC) -- A car crashed into a Harbor Gateway home where a prayer meeting was being hosted, killing one person and injuring nine others Wednesday evening, officials said. Police said the driver fled the scene and was still on the loose.

Crews responded to the 14800 block of South Orchard Avenue at about 8 p.m.

Authorities said the car, which appeared to be an older-model Buick, was traveling at a high rate of speed heading southbound on Orchard Avenue when it crashed into the home.

"Hitting brakes, I thought she was going to turn down the street, but she couldn't hit the turn. She hit the realtor sign, went airborne and went straight inside that house," eyewitness Charry Madduma described to ABC7.

At the time of the crash, 11 people were attending a prayer meeting that was being held inside the home, according to police.

"There was this debris, and I heard a loud explosion," Angie Villanueva, a participant in the prayer meeting told ABC7. "I ducked, thinking it was a bomb or something. So I ducked and I saw so much debris, so much debris and someone afterward was screaming. They were screaming for help."

One person died from their injuries, while nine others suffered injuries described as serious to less than serious.

Some of the victims were stuck under the car and had to be rescued by firefighters at the scene.

"Neighbors were already coming in trying to help with their shovel to get them out of there," Villanueva recalled. "Someone was pinned, pinned down and the rest were hit by debris from the car."

According to the fire department, the patients taken to the hospital consisted of seven women and one man ranging in age from their 40s to 80s.

The driver of the car ran away from the scene on foot and was still at large, according to officials. Madduma told ABC7 that the fleeing driver was a woman.

According to Villanueva, the members of the prayer meeting took turns hosting the event every Wednesday.