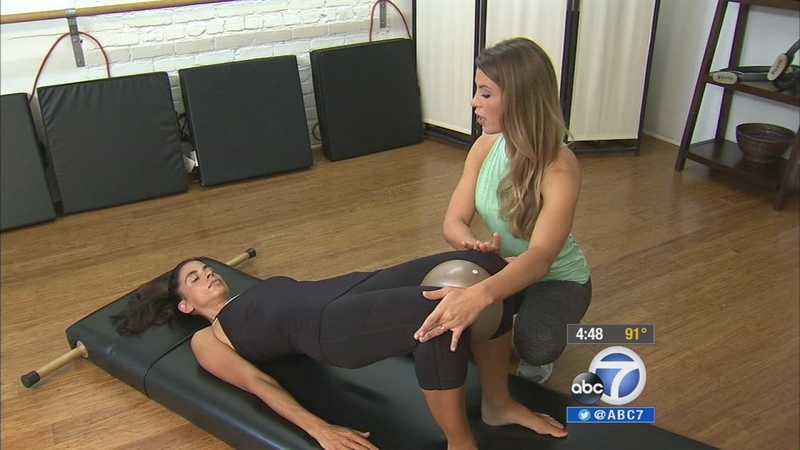 SANTA MONICA, Calif. (KABC) -- Young female athletes, moms-to-be and even senior women can all experience weak pelvic muscles. This can lead to back pain, incontinence and even a paunchy belly, but there are simple solutions to strengthening the pelvic core.

Physical therapist Christina Christie sees a growing number of women of all ages with pelvic issues.

"The stats are one in three women have pelvic floor dysfunction," Christie said.

Christie was recently in Orange County speaking to fitness pros at the IDEA World Conference in Anaheim.

"What I see in my clinic is women with incontinence, pelvic organ prolapse, pelvic pain, pregnancy issues, postpartum issues," she said.

So Christie developed a series of exercises to help prevent pelvic problems.

They're done with a special ball and elastic band that strengthens the core, because as she reminds us, the diaphragm, abdominal, hip and back muscles are all connected.

The movements are small but mighty.

"If you're used to doing full-on cardio you sort of think, what's this doing, sort of kind of thing. It's just these small, very targeted movements," said Selena Sternberg of Santa Monica.

As a mother of two, Sternberg knows firsthand the benefits of these exercises.

"I'd been running and I kept getting re-occurring problems actually because of my pelvis," said Sternberg.

She went to Pilates instructor Andrea Speir, who is a prenatal specialist.

With a small ball, Speir has clients contract the inner thigh, glute and pelvic muscles. She tells them to imagine they're exercising with a full bladder. It may not be pretty but it's effective.

This problem can happen to older women due to weight gain or inactivity, but Christie says that she also sees young women training like guys. However, they're not built the same way nor do their bodies function the same way.

"Our hips are wider. We are also are affected by our hormones. Twice a month for the great majority of us, we have hormonal shifts that make our ligaments, tendons and connective tissue more lax which means that we're more vulnerable to those orthopedic injuries," said Christie.

Both women have offerings to help those who want to try the exercises at home.

Either way, a few simple moves could mean better fitting clothes, less trips to the bathroom and reduced back pain.