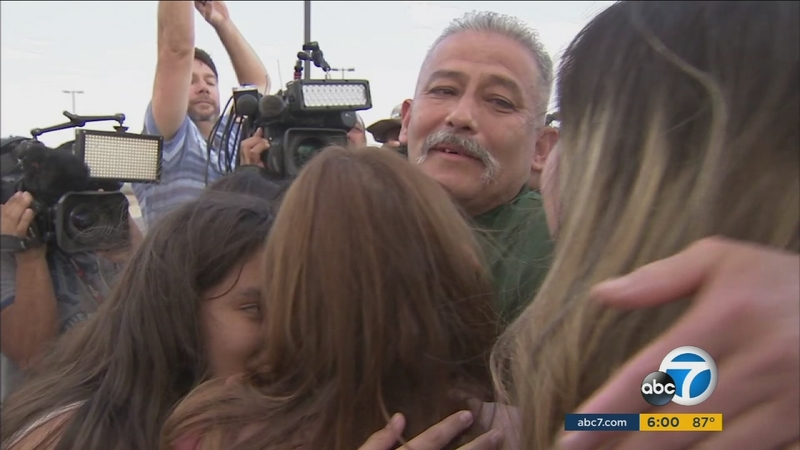 ADELANTO, Calif. (KABC) -- A Highland Park father arrested by Immigration and Customs Enforcement agents outside his daughter's school in February has been granted bond and was reunited with his grateful family Wednesday afternoon.

Romulo Avelica-Gonzalez was granted bond at $6,000 during a hearing Wednesday morning.

He was released shortly after 5 p.m. when he thanked people for their support during his ordeal.

The news followed the dismissal of a deportation order against him.

His daughter, Fatima, now 14, was recording with her cellphone when her father was picked up by ICE agents as he dropped her sister off at school on the morning of Feb. 28.

The video went viral and garnered national attention for his case.

"I have to give a lot of credit to Fatima that recorded the incident of his arrest which went viral. It was an act of resistance, and I'm hopeful that more people will do that. In a democracy, we need people to speak out when they see injustice," Avelica-Gonzalez's attorney said after Wednesday's hearing.

A Highland Park father arrested by Immigration and Customs Enforcement agents outside his daughter's school has been granted bond.

Avelica-Gonzalez's arrest stemmed from a pair of decades-old misdemeanor convictions, which have been resolved.

Although his immediate deportation order has been overturned, his overall case remains pending.

Immigrant rights groups have rallied to his defense, making his arrest a high-profile case.

Fatima also spoke at the post-hearing news conference, saying she was worried for her father's health and couldn't wait to finally see him.

#LIVE: "I feel happy & anxious that I’m finally going to have my dad back with me" - Romulo's daughter, Fatima, says https://t.co/TxMSbTKVFr pic.twitter.com/DpxZxaP4Nr

"I feel happy and anxious that I'm finally going to have my dad back with me," Fatima said.