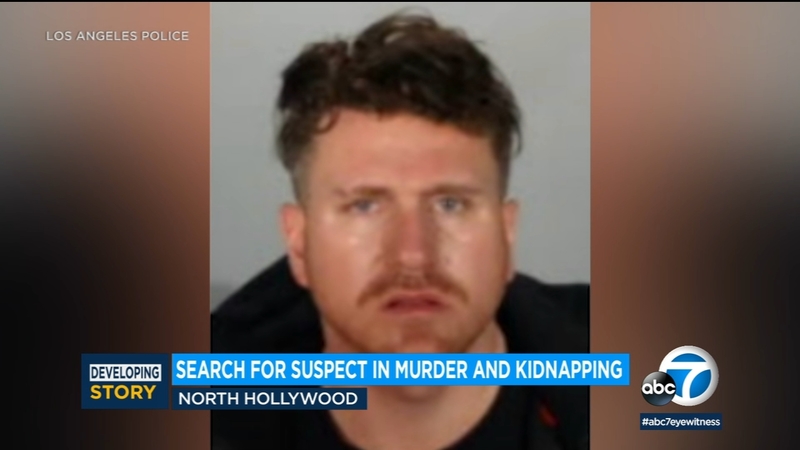 NORTH HOLLYWOOD, LOS ANGELES (KABC) -- Authorities are searching for a 37-year-old man who allegedly shot and killed another man who intervened in a dispute with the suspect's ex-girlfriend, who he then kidnapped. The woman remains missing, police said.

The shooting occurred at 2:26 p.m. Sunday in the 11300 block of Hatteras Street, according to Los Angeles police.

Authorities identified the shooting victim as Roberto Fletes, 42, of North Hollywood. Police said he died at a hospital.

After the shooting, authorities say the gunman kidnapped his ex-girlfriend, identified as 31-year-old Jenny Marie Downes.

Police say Downes and the suspect, identified as 37-year-old Shane Winfield Rayment were in an argument near the intersection and Hatteras Street and Tujunga Avenue.

One person was stabbed at a Carl's Jr. restaurant in North Hollywood Friday night and a suspect was detained on the 5 Freeway, causing a major traffic jam in the Glendale area.

Fletes tried to intervene and was shot by Rayment, according to police. The alleged gunman then forced his ex-girlfriend into a truck and fled the scene.

A crime alert was issued for Rayment. Also listed in the alert were four people believed to have accompanied by him -- a 30-year-old white man, 5 feet, 9 inches tall, 170 pounds, with long blond hair, blue eyes, a black shirt and blue jeans; and three white female suspects with no further descriptions.

The suspects' vehicle was described as a green four-door pickup, possibly a Dodge Ram.