A photo obtained shows what appears to be a balloon of Jack Skellington flying over Hollywood Hills.
KABC 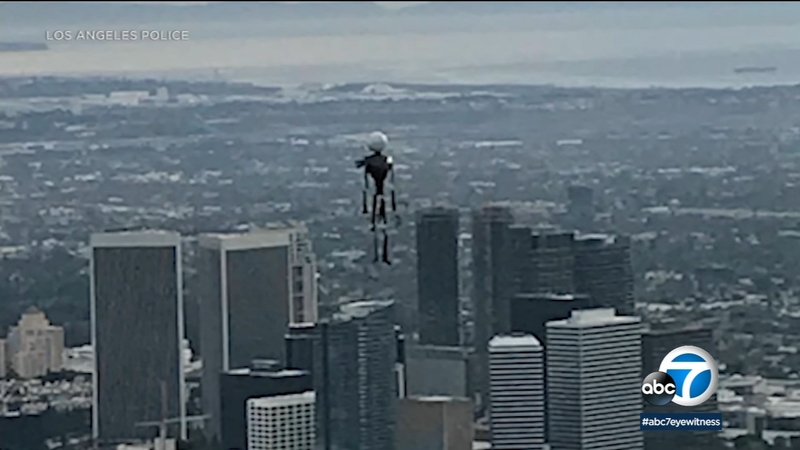 LOS ANGELES (KABC) -- You might remember reports of a "jet pack man" flying near Los Angeles International Airport. Now, the FBI may have solved the mystery surrounding the strange sighting.

This summer, air traffic control reported a "possible jet pack man in sight." Officials warned other flights to be on the lookout for what they said was "a man in a jet pack."

"A Boeing 747 pilot reported seeing an object that might have resembled a jet pack 15 miles east of LAX at 5,000 feet altitude," a Federal Aviation Administration spokesperson said at the time. "Out of an abundance of caution, air traffic controllers alerted other pilots in the vicinity."

On Tuesday, the FBI released a statement saying the so-called "jet pack man" may have been balloons.

"The FBI has worked closely with the FAA to investigate reported jetpack sightings in the Los Angeles area, none of which have been verified," read the statement. "One working theory is that pilots might have seen balloons."

A photo obtained by Eyewitness News on Tuesday shows what appears to be a balloon of Jack Skellington - a character of the 1993 film "The Nightmare Before Christmas" - flying over Hollywood Hills. The photo was taken in November 2020 and was captured by a Los Angeles Police Department helicopter.

There were multiple jet pack sightings that year by commercial pilots flying near LAX, prompting the FAA and FBI to investigate as jetpacks can represent a hazard to aircraft.

In December 2020, video showed what appeared to be a person with a jet pack flying off the coast of Palos Verdes at around 3,000 feet.

Some investigators believe it could be a drone made to look like a man in a jet pack.

Another sighting has been reported of a jetpack flying over the Los Angeles area, a recurring mystery reported by pilots that, until now, had not been captured on video.