Environmentalists say we can't ignore what these trees are trying to tell us as they're finding it harder and harder to survive.
KABC
By Rob McMillan 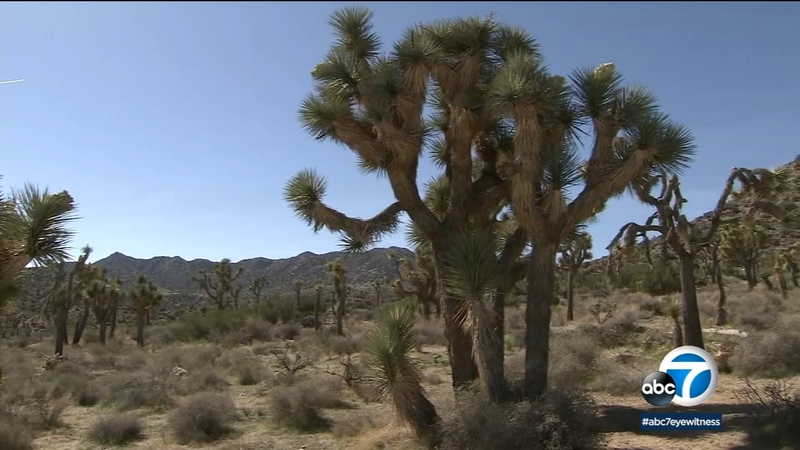 JOSHUA TREE (KABC) -- It's the proverbial star of the show at Joshua Tree National Park, and while Joshua Trees look peculiar, with ragged scraggly limbs, they're actually quite special.

"This is a group of species that is only found in our region and further south, but not in Europe, Asia, Africa ... nowhere else but here," explained Dr. Cameron Barrows at UC Riverside's Palm Desert campus.

But Barrows said Joshua Trees are starting to disappear due to climate change.

"It's not just warming, it's actually drying because of climate change, and there's only a few areas where Joshua Trees are reproducing successfully, where we see seedlings coming up and successfully becoming adults," said Barrows.

Even though Joshua Trees can live to be hundreds of years old, they're already very picky when it comes to finding a spot to thrive.

As we celebrate Earth Month this April, a young SoCal climate activist is helping to raise awareness by making a positive impact on the environment, taking on a monumental task.

At Joshua Tree National Park, there are plenty of them at the 4,000-foot level, but along Highway 62 through the town of Joshua Tree, down below the 3000-foot level, there aren't as many of them. Even though they might appear healthy, you can't quite judge a book by its cover.

Barrows said due to climate change, many have stopped reproducing.

"It's as if you were to drive into a community and you saw a senior center, but you didn't see an elementary school," Barrows said. "You get a feeling this community is not going to be here in 50 years."

In the west end of the park, Barrows said Joshua Trees are actually in pretty good shape.

He would refer to the area as "climate refugia," a place where the effects of climate change appear to be buffered. He said right now, we need to protect trees in places like that.

"A lot of research suggests that by the turn of the century, Joshua Trees are going to be in a very small amount of their traditional range," said Joshua Tree National Park Superintendent David Smith.

He said another big problem they're facing wildfires. While they might be a rarity in the desert, wildfires have taken their toll on the healthy Joshua Trees in the area.

So for the young trees, officials are doing what they can to protect them.

"That means going out there with rangers and staff, to cut down those exotic weeds that never existed here, to create a fire break, so that when fire does come, and it will come every summer, with those monsoon seasons and the lightning, that the flames aren't high enough to actually damage the Joshua Trees," explained Smith.

Besides protecting the little Joshua Trees, other officials are seeing if the trees at higher elevations might be better suited to survive warmer, drier conditions elsewhere in the Mojave Desert.

"We think there are populations within the species that will naturally already be better adapted to heat to drought stress," said Dr. Jeremy Yoder, who's a part of a team that collects fruit from Joshua Trees.

A local student and activist has made it his mission to spruce up the popular trails at Eaton Canyon in Pasadena. He's been working for 633 days and counting.

They take seeds and plant them in a greenhouse in Nevada. The team then moves them back to gardens in harsher climates to see if they'll do better than trees already there.

"That can help that population to cope with the warming conditions as things move forward," said Yoder.

Regardless, environmentalists say we can't ignore what these trees are trying to tell us as they're finding it harder and harder to survive.

"Back in the 1800s, the miners would bring canaries down into the coal mines with them to test for whether the air was good enough for them to be down there mining whatever they were [mining] ... mostly coal. So if the canary were to keel over, it was time to get out of the mine, and so species, biodiversity, in many ways, are those canaries for us, and they're telling us that the environment is getting increasingly unable to support life, and that affects us directly," explained Barrows.

Check out the rest of ABC7's Earth Month coverage and more from Disney Planet Possible here.

The Walt Disney Company is the parent company of this ABC station.