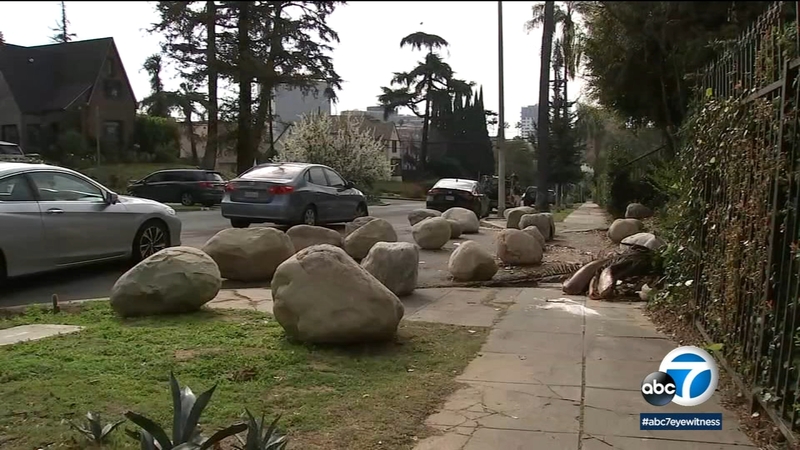 Boulders in Koreatown neighborhood appear to block out homeless camps

LOS ANGELES (KABC) -- More than two dozen large boulders were blocking a residential sidewalk in Koreatown Tuesday, in what appears to be an effort to keep homeless encampments from sprouting up.

This is on the 300 block of South Westmoreland Avenue, at an access driveway to Shatto Park. Neighbors say the area is usually occupied by the homeless.

The boulders made a sudden appearance soon after a homeless encampment was cleared from there recently.

The city of Los Angeles is looking into who may have placed the boulders there.

"You couldn't do that without a big truck and maybe even a tractor, so they'll be looking to see if they can find some surveillance video to lead them to the person who did this," reported ABC7's Scott Reiff.

The boulders are not legal since they're on city property and encroach into the street.

A representative from his office told Eyewitness News:

"Council District 1 does not support utilizing any kind of barricades or blockage to deal with homelessness. Our neighboring council district has requested the Bureau of Street Services to move the boulders."

This isn't the first attempt for neighborhoods to control L.A.'s homelessness problem.

Back in 2020, residents lined a South Robertson underpass with boulders. The city made them remove the stones.

Last summer, residents of a Los Feliz neighborhood installed several heavy planters along the sidewalk to keep a sprawling encampment from returning. The city issued threats to remove them, but as of Tuesday morning the planters are still there and the encampment is not.

A homeless population once largely limited to the Skid Row section of downtown L.A., has spread to virtually all parts of Los Angeles.

The nation's second-largest city also has the second-largest homeless population in the country--41,000 among the overall city population of four million people, according to a survey conducted before the COVID-19 pandemic.

In July 2021, crews removed tents along the Venice boardwalk as part of an effort to clear homeless encampments from that area. And in October of the same year, more than 200 transients staying at MacArthur Park were relocated to indoor locations such as motels, and other shelters. The city said the park's closure was necessary for much-needed repairs.