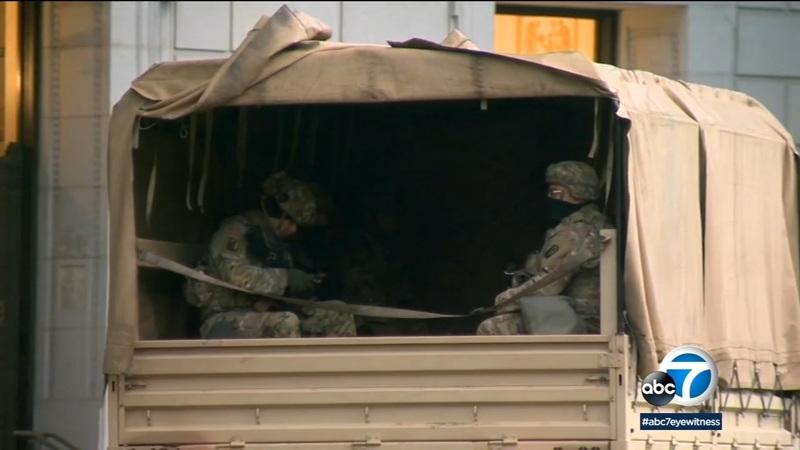 Extra security in place for Los Angeles, Sacramento ahead of inauguration

LOS ANGELES (KABC) -- The Los Angeles Police Department is significantly ramping up patrols at areas across the city as authorities brace for potentially violent demonstrations leading up to the inauguration of President-elect Joe Biden.

The potential for civic unrest has prompted LAPD to increase security measures to protect businesses and government buildings.

"We'll have added staffing in substantial numbers around our downtown business core, around our Civic Center as well as other critical spots around the L.A. region as we approach the inauguration and on the day itself and into the evenings each night," said LAPD Chief Michel Moore.

With less than a week until the inauguration of President-elect Joe Biden, law enforcement in L.A. and across the country are getting ready for possible protests or instances of violence.

"After the violent attack on the U.S. Capitol on January 6, and the subsequent reports that armed protests are planned at state capitols throughout the country, the FBI has urged police chiefs to be on high alert for threats on Wednesday, January 20, 2021, Inauguration Day for President-Elect Joe Biden," Martinez said in a statement.

"In light of this concerning information, I am urging all departments in City Hall whose staff work in these buildings that they work remotely on January 20 to ensure their safety and allow LAPD and other law enforcement to focus on safety concerns outside the buildings and throughout Los Angeles,'' she said. "I make this decision for the safety of all city employees, including those who must be in council chambers with me for our council meetings in City Hall to take place.''

The FBI has warned potentially violent demonstrations are being plotted for all 50 state capitols and elsewhere in the coming days. Law enforcement in California are preparing for the protests.

Councilmembers have been conducting meetings via teleconference, but Martinez noted that the meetings are not able to be conducted virtually without some staff being present in City Hall. City Council meetings will resume as scheduled the following week.

Law enforcement up and down the state are ramping up security around government buildings, the offices of politicians and other high-profile targets. In Sacramento, the California Highway Patrol is leading the effort to secure the state capitol.

"Along with the CHP and Office of Emergency Services, I've activated the California National Guard to support the CHP to enhance security with an initial deployment of up to 1,000 guard members to protect critical state critical infrastructure in and around the state capitol," Gov. Newsom said on Thursday.

In downtown Los Angeles, some boxes had already been removed on Friday night.

The Postal Service says the temporary measures are meant to protect postal property, employees and the public.