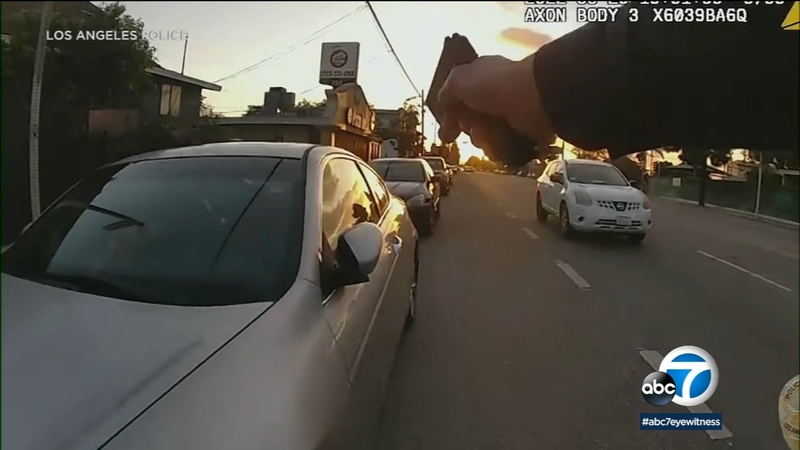 LAPD officers responded to reports from witnesses of a man with a gun last month, but what was he really carrying?

The video, recorded from an LAPD vehicle, captured a tense scene after officers spotting a man who they believe was armed with a gun. Moments later, the officers confronted him and opened fire.

The incident happened around 7 p.m. on March 29. LAPD officers responded to Martin Luther King Jr. Boulevard and Avalon Boulevard in South L.A. after citizens reported a man armed with a gun.

"The comments indicated there was a male adult armed with a handgun pointing that gun at passing vehicles," said LAPD Detective Meghan Aguilar.

Surveillance camera video shows a man, identified as Jose Barrera, 45, walking along the street making erratic movements, pointing something in his hand at a building.

LAPD said reports began coming in of a man armed with a handgun who was reportedly pointing it at passing cars.

Authorities say customers inside a restaurant thought he was threatening them with a gun.

"When patrol officers arrived to the area they saw Barrera on the sidewalk pointing what they believed was a handgun at an occupant of a nearby vehicle which was stopped," said LAPD Capt. Kelly Muniz.

That's when the officer-involved shooting happened. The encounter was recorded on bodycam video.

Barrera fell to the ground, wounded by police gunfire. Officers moved in and took a bloody Barrera into custody. He was hospitalized for treatment and later released.

Photos show Barrera's cell phone on the sidewalk. It was recovered by investigators. The 45-year-old did not have a gun.

A case was presented to the L.A. County District Attorney's Office accusing Barrera of assault with a deadly weapon, but the DA decided not to press charges.