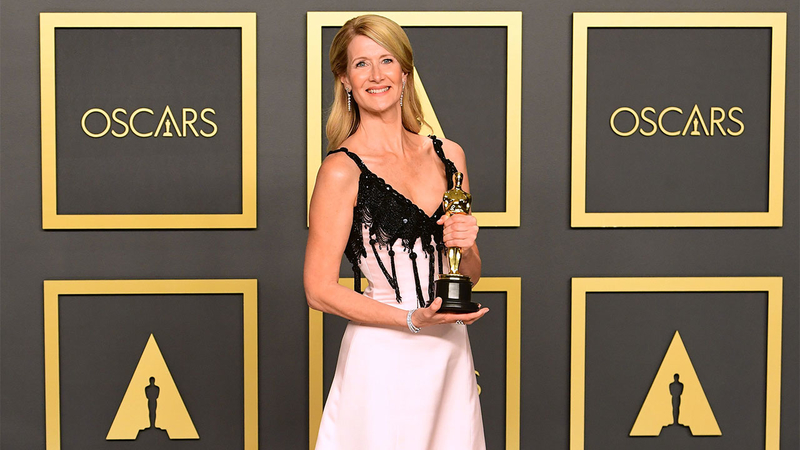 LOS ANGELES -- The 2020 Oscars were a family affair for best supporting actress winner Laura Dern, who walked the red carpet with her mom Diane Ladd and children and later thanked her parents, calling them her heroes, in her acceptance speech.

"Some say you never meet your heroes, but I say if you're really blessed, you get them as your parents," Dern said after winning the Oscar for her role in "Marriage Story."

"This is the best birthday present ever!"

"I share this with my acting heroes, my legends Diane Ladd and Bruce Dern. You've got game. I love you," she continued. Dern also thanked her co-stars and "Marriage Story" director Noah Baumbach.

Sunday marked Dern's first Oscar win and caps an awards season where the actress has also collected honors from the Screen Actors Guild and Golden Globes.

Best Supporting Actress nominee Laura Dern speaks to On The Red Carpet at the Oscars.

"Marriage Story" shows the disintegrating relationship between a showbiz couple played by Scarlett Johansson and Adam Driver. Dern's well-heeled lawyer helps Johansson outmaneuver her estranged husband in the courtroom, causing more strain on the pair and their young son.

"It's the most perfectly written script I've ever read. Every word is perfection. Every stage direction is included. It's like reading a great playwrights work," Dern said last month about "Marriage Story," adding that her character Nora was "the most fun character ever."

Dern, who stopped for photos earlier in the evening with her mother and children Jaya and Ellery, told On The Red Carpet that she planned to "surrender" to the moment should she win the Oscar for best supporting actress for her role in "Marriage Story."

"I think you have to surrender. I understand why people prepare and I think that's a much smarter choice but hopefully you get inspired in the moment," Dern explained.
EMBED More News Videos

It's been a good awards season for Laura Dern. The Hollywood veteran has won just about every trophy, including a Golden Globe, a Critics' Choice and SAG Award. She has now nominated for an Oscar for her scene-stealing role in "Marriage Story."

Dern's win Sunday came nearly three decades after her first Academy Award nomination, a lead actress bid in 1992 for "Rambling Rose." She received a supporting actress nod in 2015 for "Wild," and has earned Emmys and a wealth of critics' honors over the years.

The actress, who turns 53 on Monday, called the Oscar the "best birthday present ever."

The versatile actress also was on screen last year in "Little Women," anchoring family life as Marmee for the film that garnered six Oscar bids, and has proved her commercial chops with the "Jurassic" franchise.

Dern comes from a pedigreed Hollywood family: father Bruce is a two-time Oscar nominee ("Coming Home," "Nebraska"), and Ladd played her mom in "Rambling Rose" and earned her own Oscar nomination, for supporting actress. Laura Dern began acting as a child, moving from small roles to substantive, attention-getting work in the mid-1980s with "Mask," "Smooth Talk" and "Blue Velvet."

Backstage, Dern was asked who inspired her take on the strong characters she played in "Marriage Story" and in TV's "Big Little Lies."

"I start with my mother. She and my godmother, Shelley Winters, were massive influences on my life as an actor and activist," she replied. As for the advice she would give women aspiring to work in Hollywood, Dern said: "Be loud, be proud, stand by incredible sisters."

In an Associated Press interview a week before the Oscars, Dern said her roots helped her to cope with the awards whirlwind.

"I am really lucky at moments like this to have been raised by actors and to have been acting since I was 11," and to know how uncertain the industry can be, she said. "You stay detached, and you enjoy the gift of working with people you love and ... remembering what it's really about."

But there's something to be said for the "other fun stuff that's dreamy and lovely," she added.

The other contenders in the category were Kathy Bates for "Richard Jewell"; Scarlett Johansson, "Jojo Rabbit"; Florence Pugh, "Little Women" and Margot Robbie, "Bombshell." In a year notably scant in nominees of color, critics saw opportunities missed in the category with the omission of Jennifer Lopez for "Hustlers" and Zhao Shuzhen for "The Farewell."