In just five weeks, Project Roomkey has acquired over 15,000 hotel rooms, over 1,300 trailers and has housed over 7,000 people.
KABC
By Phillip Palmer 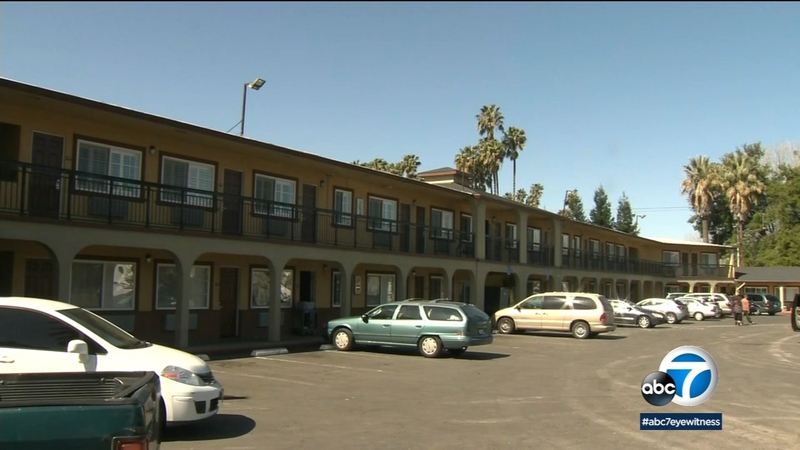 LOS ANGELES (KABC) -- As thousands in Los Angeles and across Southern California struggle during the coronavirus pandemic, one of the biggest challenges facing the city is housing the homeless.

Project Roomkey is a first-in-the nation program created by the governor's office in early April. Its stated mission is to protect the homeless from COVID-19 by getting them off the streets.

In just five weeks, the program has acquired over 15,000 hotel rooms and over 1,300 trailers, housing over 7,000 people. A federal judge in Los Angeles has called Project Roomkey a success, but it has its critics.

There are concerns a 90-day room rental could last much longer.

Several cities like Covina have voiced displeasure with how the plan has been implemented.

"We were not told about this and we were not brought to the table, and figuring this out and rolling this out with the community in the proper way," said Covina Mayor Victor Linares.

And what happens to the over 500 trailers across the L.A. County?

Large hotels throughout Los Angeles County are helping to house and treat the homeless during the coronavirus pandemic.

Some of the roughly 300 RVs in the city of L.A. are at the Woodland Hills Recreation Center and even with security on hand, there are risks when those with mental health challenges interact with people at a park.

"We're able to do things and spend money right now to fix the situation, but that's a temporary fix, it's the 90-day fix," said former L.A. County Supervisor Don Knabe. "It's the next wave fix. But what's the permanent fix?"

But what if Project Roomkey is a permanent fix to homelessness and not just protecting them from COVID-19?

"It is a very challenging moment, but it is an opportunity to reimagine and transform the homeless service system and frankly accelerate the work we've already been doing," said Deputy Mayor of L.A. Christina Miller.

The long-term plan is not to leave the RVs at their current location.

The governor said California has secured a total of 10,974 hotel rooms for the unsheltered as well as another 5,025 motel rooms, thanks to a partnership with Motel 6.

"I want to reassure people, when rec centers are open we're not going to have trailers right next to them," Mayor Eric Garcetti has said.

Garcetti plans to identify surplus city properties where the trailers can eventually be moved permanently. One location at Crenshaw and Exposition boulevards is a partnership with L.A. County. Wrap-around services will be attached to future locations with the goal of moving the individual into permanent housing.

"They're not a perfect solution, but we will take anything that is a solution," Garcetti said. "Hotel beds, shelter beds and these trailers and they're going to continue to be a critical piece."

"It's showing them that life on the street isn't their destiny," Garcetti said. "It's not where they should stay."

"Project Roomkey has shown me that people do want to get off the street and they're willing to take the help when offered," said County Supervisor Kathryn Barger.

For the critics who see trailers in parks, at the beach and next to golf courses, supporters point out, 60,000 homeless people in the county are already populating those same areas, but without any job training, security or health care attached.

The temporary shelter might prove to be a long-term solution for many.