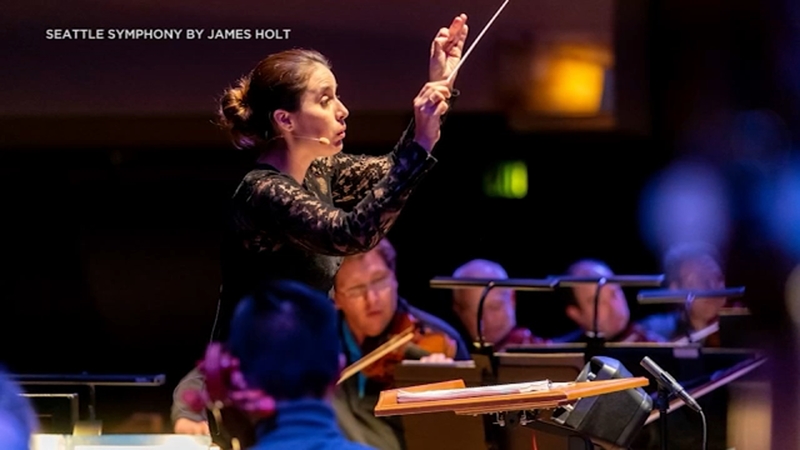 LOS ANGELES (KABC) -- The Los Angeles Opera has selected a Latina as its next resident conductor, a decision OPERA America described as a "landmark appointment."

Conductor Lina Gonzalez-Granados has traveled the world bringing operas and symphonies to life. After serving as the conducting fellow at the Seattle Symphony and most recently the Philadelphia Orchestra, the native of the Colombian city of Cali is ready to call Los Angeles home in 2022.

"Next season I will be doing opening night, the first production of a season which is a huge, important moment at the beginning of any year," said Gonzalez-Granados.

In Boston, Gonzalez-Granados founded Unitas Ensemble, which performs works by Latin American composers, and offers free performances. It was a response to noticing the lack of representation. "For me it's a catastrophe, artistically, that we don't get the visibilities," she said.

The award-winning conductor is a strong believer that all music has potential to be a classical piece. "In L.A. in general, it's a city with such an explosion of multicultural resources. Our musics are as valuable as our beings," said Gonzalez-Granados.
EMBED More News Videos

The Los Angeles Philharmonic and Los Angeles Master Chorale separately announced they will require proof of full vaccination against COVID-19 for all audience members, staff, and artists at their concerts at Walt Disney Concert Hall.

We had to ask: What is on her playlist?

"I have very varied tastes, and that is like merely the direct reflection of my heritage from Colombia because Colombia is extremely rich culturally," she said. "From 'Hamilton,' now with 'Encanto' -- which is one of the best movies I've ever seen lately -- to Queen to the Beatles, to 'Barber of Seville.'"

As part of the L.A. opera, Gonzalez-Granados will conduct some mainstage performances as well as other company programs like Off Grand, which takes opera on the road to different venues.

"We share the same core values and we believe that music has to have access for all of us," she said. "And that being said, that all our musics are important."