Rain soaks SoCal as storm moves across region, flooding roads and knocking out power in some areas 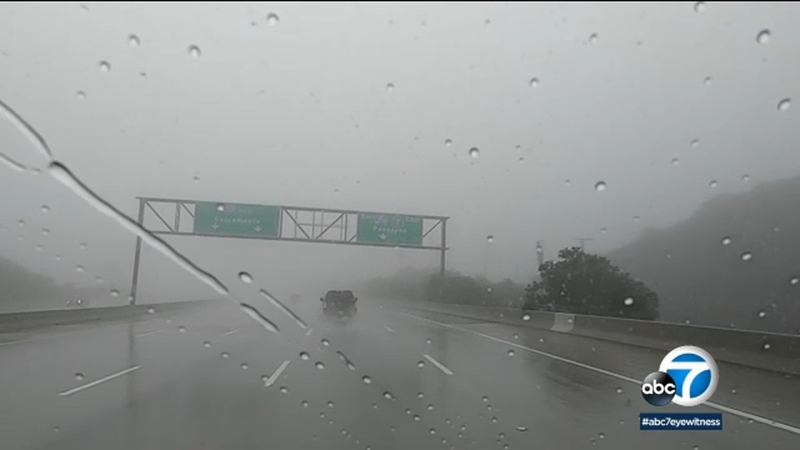 Rain soaks SoCal, flooding roads and knocking out power in some areas

LOS ANGELES (KABC) -- A major storm system drenched much of Southern California with rain on Tuesday, resulting in flooded roadways across the region while raising concerns over potential mud and debris flows in recent burn areas.

In North Hollywood, parts of Lankershim Boulevard were more reminiscent of a lake than a major thoroughfare -- and cars weren't the only ones powering through it. Near Los Angeles International Airport, stormwater flooded at least one southbound lane of the Sepulveda Boulevard tunnel, leading to traffic delays as crews worked to clear the water. And in northern Los Angeles County, a stretch of Lake Hughes Road had to be closed due to mud and debris that cascaded over the roadway in Castaic.

But the rainfall wasn't going to slow down resident Arthur Wypchlak, who decided to go for a run in the downpour.

"I woke up with a lot of energy. I just needed to use it, and the rain just doesn't stop me," he said.

A major rainstorm was soaking roadways in Agoura Hills as the morning commute was set to get underway on Tuesday, Dec. 14, 2021.

Traffic signals were knocked out of service on Pacific Coast Highway from Coastline to Cross Creek in the Malibu area, making already treacherous driving conditions even more dangerous.

Power outages were also reported throughout the area. By mid-morning, customers were reporting outages in an array of areas covered by the Los Angeles Department of Water and Power, including El Sereno, Highland Park, Westwood and Studio City. Southern California Edison was reporting outages affecting more than 6,000 customers throughout Los Angeles County, although it was unclear how many of them were storm-related.

The northern part of Los Angeles County is seeing heavy winds, flooding and dangerous roads as a major storm sweeps through the region.

This week's storm is typical for this time of the year but notable because it's the first big snow that is expected to significantly affect travel with ice and snow on the roads, strong winds and limited visibility, said National Weather Service meteorologist Anna Wanless in Sacramento.

"Most of California, if not all, will see some sort of rain and snow," she said.

In Santa Barbara County, residents of mountain communities near the Alisal Fire burn scar were ordered Monday to evacuate over concerns that heavy rains might cause flooding and debris flows that could inundate hillside homes.