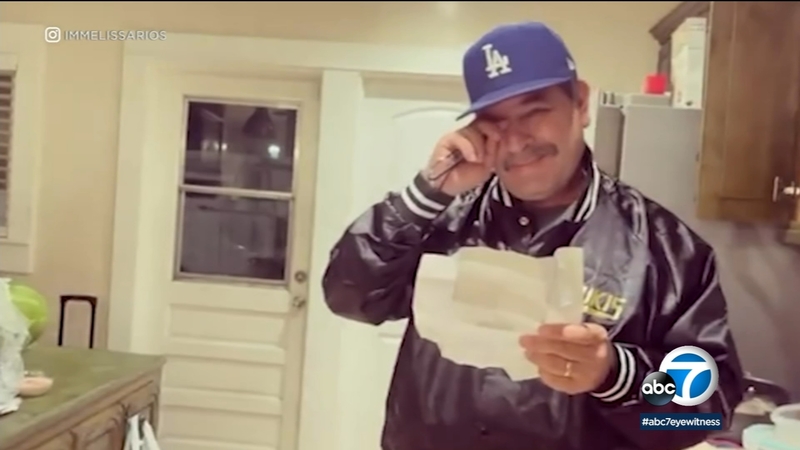 When the band announced the historic reunion, it brought deep and sweet nostalgia for generations of many Latino families, and a flood of videos on social media of children surprising their parents and grandparents with tickets to the show.

One video showed siblings dressed up as Los Bukis for Father's Day and then hand over the tickets to their parents, who were brought to tears.

The video shows the San Bernardino couple start to dance. Their daughter told Eyewitness News they all grew up listening to Los Bukis, a band that is important to her parents because it reminds them of when they first started dating. However, they never had the chance to attend a concert until now.

For fans of Los Bukis who were lucky enough to score tickets to the legendary Mexican band's sold-out shows at SoFi Stadium, the wait is almost over.

"I believe that it was this big moment for this generation because we were like, 'What can we give them?' ... Because they're always working - early mornings, late nights," said Cali 93.9 on-air personality Melissa Rios.

Rios also surprised her dad with tickets to the show and posted the moment on Instagram. She became emotional talking about what that meant to her.

"This is what I work for. This is what he brought me here for. It's so weird to say that, but it feels to be able to live this moment with my father is just priceless," she said.

"I'm 31. I've seen my dad cry twice - when my grandmother passed away, when I gave him these tickets."

After 25 years, the Mexican band Los Bukis are reuniting for a tour, beginning with a limited concert series kicking off in Inglewood at SoFi Stadium.

Her dad passed down his love for Los Bukis to his children and grandchildren - an experience many can relate to.

"This is not just a regional genre. This is our lifestyle."