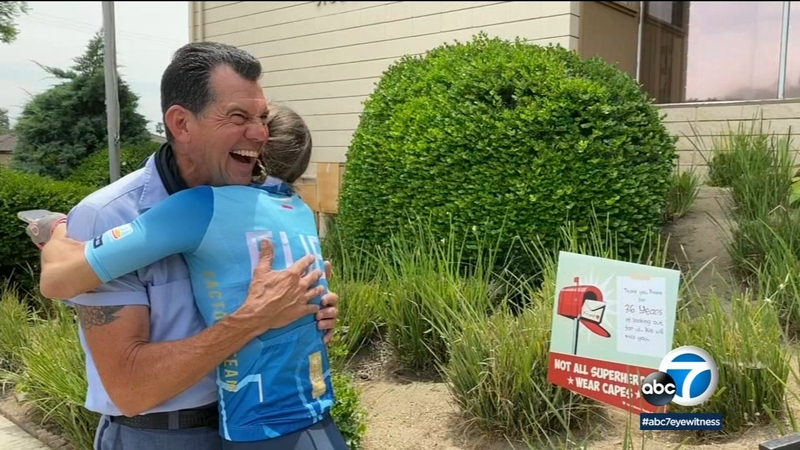 SIERRA MADRE, Calif. (KABC) -- You probably don't recognize his face or his name, but in the small city of Sierra Madre, you could call Frank Rubio a local celebrity.

"This man... I'm going to start crying because he's so incredible," Deb Sheridan sighed. She's been a resident along Frank's route for more than three decades.

Frank has served the city as a mail carrier for 36 years.

He's watched young children grow into adults and became lifelong friends with the families on his route.

"I mean, how many people can go to work every day and see three to four hundred of their friends. Not too many people that I know, so I feel very blessed to work in this town," Frank said.

But he is now ready to retire. Signs celebrating his long career lined the streets.

Angela Throop and her family have known Frank for 19 years: "He's just a bright spot in our lives. Whenever you see him he smiles and asks how you're doing. He keeps up with your life. We are going to miss him, but we're excited for his retirement because now he gets to have fun," she said.

Neighbors and a city councilman say they're losing more than a mailman, they are losing a trusted friend and hero.

"Frank saw the mail piling up at somebody's house, got the neighbor to go next-door with him and they knocked on the door. No answer so they called the police, I went in and she had had a stroke. She was in bed and they saved her life," Deb explained.

"He's just so special and it's so sad to be losing him," said Sierra Madre Councilman Robert Parkhurst.

A longtime UPS driver will keep remaining a fixture of a Pasadena community after they banded together and made his reconsider changing his route.

Frank said his first day of retirement will be spent golfing in Palm Springs.

He's excited to get some rest but promises to routinely come back and say hello.

"I've been so blessed to work in this city. The people in this city I guess are very appreciative of the job I've done. I've always just tried to do my best. Like I tell them all the time, 'If you're kind to people, they're kind back to you,'" he said.