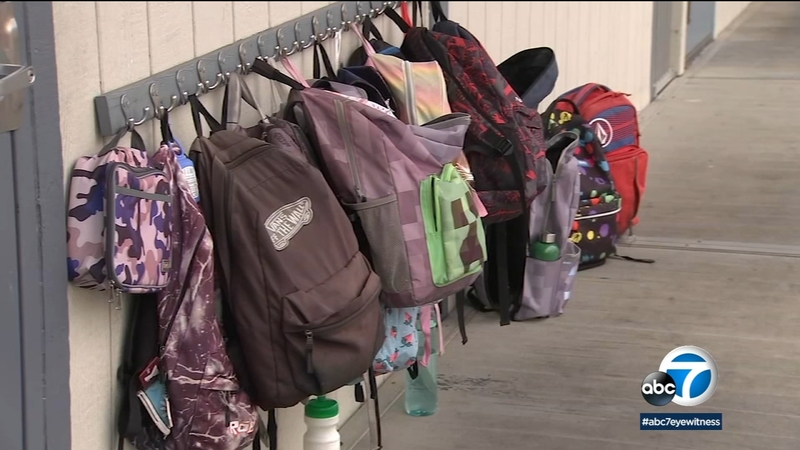 COSTA MESA, Calif. (CNS) -- The California Supreme Court has rejected a request by the Orange County Board of Education to block students from being required to wear face coverings in school according to court records.

"I am surprised it was that quick to be honest with you,'' Orange County Board of Education member Tim Shaw told City News Service.

"But I think we still have some legal options -- maybe starting out at a lower court and working our way up. We'll have to decide if we want to do that or not and what the legal questions are.''

Shaw said critics of the board's move don't quite understand that we were not arguing whether or not masks were a good idea or bad idea.''

Shaw said the lawsuit questioned whether Gov. Gavin Newsom should have the authority under an emergency order that is about a year and a half old to "unilaterally'' make a declaration about face coverings.

"We need to go back to regular order here,'' Shaw said. "Pass it through the Legislature like normal.''

As 56 million school children return to the classroom, the debate over masks in school rages -- along with the Delta variant.

The board of education, which does not have any authority over the school districts, issued a statement before the lawsuit was filed.

"When necessary, the board will fight to protect the health, safety and welfare of our county's kids at school. Unfortunately, with the governor's most recent action to force Orange County's children, even those as young as 5 and 6 years old, to endure an academic year covering their faces for hours on end, the time to fight has come again,'' according to a statement posted on the board's website.

"Putting aside for the moment the lack of a sound medical or scientific basis for the governor's requirement to mask school children -- who in general are neither at risk from COVID-19 nor likely to spread it -- and also putting aside the lack of any thoughtful, well-considered and transparent balancing of the substantial harms of forced masking of juveniles against the purported benefits, the governor and his state-level executive agencies do not have the power to continue the state of emergency indefinitely, and to continue to suspend the Administrative Procedure Act to circumvent normal agency rule making requirements,'' the statement continues.

"Indeed, the California Emergency Services Act (Cal. Gov't Code Sec. 8629) requires the governor to proclaim the termination of a state of emergency at the earliest possible date that conditions warrant.'

"On June 11, 2021, the governor announced that actions of Californians over the prior 15 months 'had successfully curbed the spread of COVID-19,' and he rescinded his 'stay-at-home' order. But while conditions clearly warrant the end of the state of emergency, and the governor effectively has announced as much, the governor has refused to give up his emergency powers. And he has now misused that power in a way that threatens serious harm to Orange County's children.''

Dr. Dan Cooper of UC Irvine's Institute for Immunology, who has been active in the university's COVID-19 pandemic research, disputed the board's statement that children are not at risk from the coronavirus.

"That's a falsehood, that's incorrect,'' the pediatrician told City News Service. We've learned that children are at risk of COVID. Yes, it's a milder disease, but to say they're not at risk is a crime. It's a lie.''

Cooper noted that "even with the Alpha variant there were plenty of kids who got quite sick and we don't even know the long-term consequences. Yes, thank God, the death rate is low, but dying is not the only comorbidity. There are kids who get influenza who end up in ICU who have lung disease for the rest of their lives.''

Cooper also disputed that children are not vectors of the disease.

"Kids do spread it,'' he said. Most of the data is from the Alpha variant, which isn't around anymore, so we don't even know how bad this spreading is going to be now with Delta.''

Gov. Gavin Newsom stood his ground on the mask mandate for school students as he faces a lawsuit from the O.C. Board of Education over the rule.