6 new species of miniature frogs have been discovered in Mexico

Most frogs hatch from eggs into tadpoles, but these species emerge from eggs as "perfect miniature frogs," scientists say.
CNNWire
By Zoe Sottile 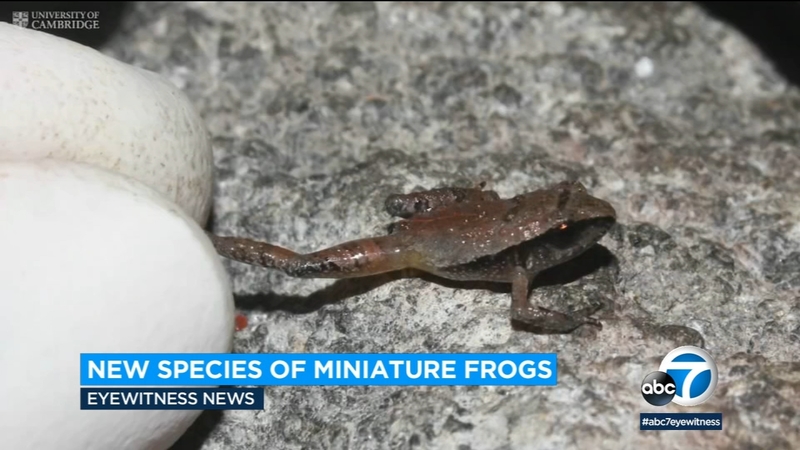 6 new species of miniature frogs have been discovered in Mexico

They're tiny, adorable and endangered: Six new species of miniature frog have been discovered in Mexico by researchers from the University of Cambridge, London's Natural History Museum and the University of Texas at Arlington.

At just 15 millimeters long when fully grown, all six species are smaller than a penny (around 19 mm in diameter), according to a news release from the University of Cambridge.

"Until now these new species have gone unnoticed because they're small and brown and look really similar to other frogs," Tom Jameson, a researcher at the university's Department of Zoology and University Museum of Zoology, said in the release.

The newly-discovered frogs, who make their homes in the leaf litter of Mexico's forest floors, are still a source of mystery, according to Jameson. Researchers are in the dark about many details of their behavior and social lives.

One unique detail scientists do know is that they are "direct-developing" frogs. Most frogs hatch from eggs into tadpoles before becoming frogs as adults, but these species emerge from eggs as "perfect miniature frogs," according to the release.

The tiny species live in equally tiny habitats, like a specific hillside, making the frogs especially threatened by habitat loss, the release said. The research team is working with NGOs and the Mexican government on conservation efforts.

A vacant coastal property near LAX can be a bit noisy, but some of Southern California's most endangered species are flourishing there.

But, their small size doesn't reflect the frogs' role in the ecosystem. "With millions of these frogs living in the leaf litter, we think they're likely to play a hugely important role in the ecosystem as a source of food for everything else, from lizards to predatory birds," said Jameson.

Jameson is particularly proud of the name cueyatl, which was chosen "to honor the rich human history of the Valley of Mexico, and the local people who have probably known these frogs far longer than we have," he said in the release.

The study on the frogs, published in "Herpetological Monographs" on April 4, required a painstaking hours-long investigation to distinguish the new species from another, very similar species from the Craugastor group.

The research team used DNA sequencing and 3D models of the frogs' skeletons based on CT scans to compare minute details between the species, according to the release.

And the researchers hope that there are even more species of tiny frog yet to be identified.

"Despite this progress, we suspect that additional species await discovery, particularly in western Mexico and east of the Isthmus of Tehuantepec," the scientists wrote in the study.