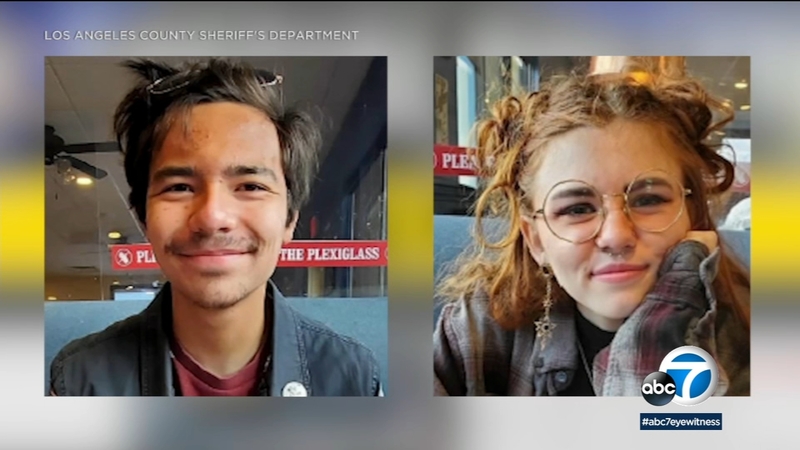 Authorities work to recover bodies amid search for missing couple

ANGELES NATIONAL FOREST (KABC) -- As relatives of a young couple missing since last week fear the worst, authorities worked Wednesday to recover two bodies found near a car wreck at the bottom of a steep cliff in the Angeles National Forest.

The crash site is about 20 miles from where Ethan Manzano and Sophie Rayanne Edwards, both 19, were last seen on July 1.

Sheriff's officials said the vehicle was spotted at about 5:20 p.m. Tuesday near mile marker 72 of the Angeles Crest Highway, near Dawson Saddle Trail. Chad Keel, a Wrightwood resident who was helping search for the missing couple, told reporters he was operating the drone that spotted the wreckage and volunteers contacted the sheriff's department.

Authorities are still in the process of determining the vehicle's owner.

Two bodies have been found amid a search for a missing teen couple, last seen in the Angeles National Forest.

Some of the couple's belongings were also spotted near the crashed vehicle, which was found about 1,300 to 1,500 feet below the roadway, partially obscured by brush. Two bodies are inside the vehicle, but they have not been positively identified.

Friends and relatives, however, fear the worst.

"She was an amazing young lady, very intelligent and kind and just full of life and spunk," said Cheyenne Chassie, Edwards' sister.

Ethan Manzano and Edwards, his girlfriend, were visiting friends in the Newcombs Ranch area but left around 1:30 a.m. on July 1 to drive home to Apple Valley. They never arrived. The couple were planning to move to Colorado over the Fourth of July weekend.

Investigators speculate that the vehicle's driver veered off the winding roadway, sending the vehicle careening down the hillside.

The California Highway Patrol was overseeing the recovery effort, with help from the Los Angeles County fire and sheriff's department.