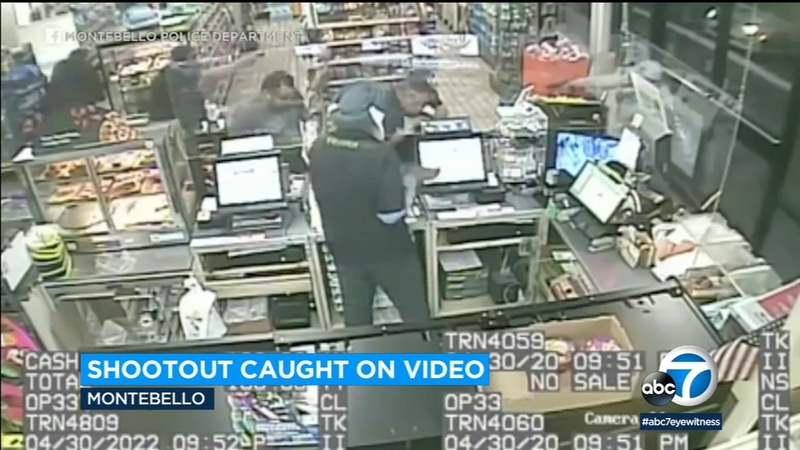 MONTEBELLO, Calif. (KABC) -- A wild shootout inside a 7-Eleven store in Montebello was captured on surveillance video, prompting a search for two suspects.

It happened on Saturday, April 30, just before 10 p.m. at the store located on the corner of Beach Street and Greenwood Avenue.

The footage shows a man wearing a light-colored long-sleeved shirt and a white baseball cap walking toward the exit when he encounters another man.

The two exchange words and in seconds, a shootout begins.

Customers who were checking out are seen immediately ducking for cover as multiple shots were fired. The clerk is seen hiding underneath the cash register.

Montebello public information officer Michael Chee said it's unknown what sparked the shootout. It's also unclear if the two men knew each other.

"We are happy to report that no one was hurt or injured," Chee said. "Miraculously no one was injured by the bullets or the gunfire. But the suspects do remain at large."

The gun battle has left workers at the store on edge.

"I could have been back here," said store cashier Javier Romero. "It's a really scary thing. You just hit the floor, pray that you don't get hit."

Romero says he wasn't working when the shooting happened, but he saw police surrounding the area.

"I couldn't come in because the cops were around everywhere, but from what I heard, there were two people having an argument and they started shooting at each other," he said.

Montebello police are asking anyone with information to contact Det. Fivecoat at 323-887-1247.

You can also submit an anonymous tip by calling Crime Stoppers at 1-800-222-TIPS.