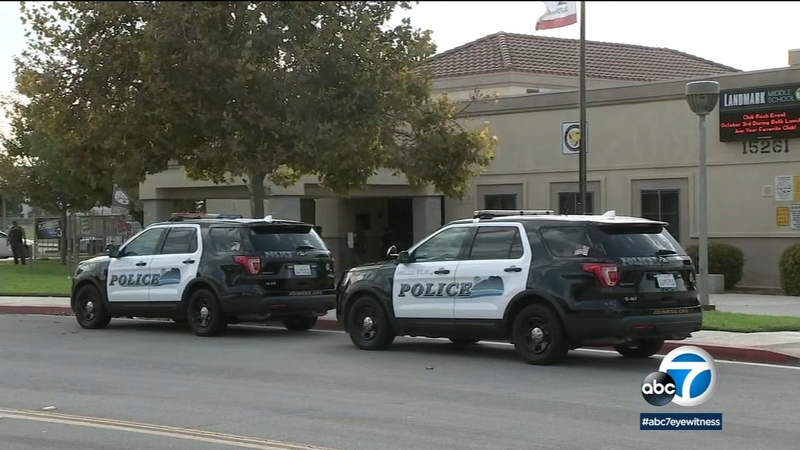 2 girls apprehended after another assault at Moreno Valley middle school

MORENO VALLEY, Calif. (KABC) -- Authorities are investigating another assault involving students at a Moreno Valley middle school in the wake of a series of violent on-campus incidences in the past month, including one that turned fatal.

The 12- and 13-year-old students were booked into Riverside County Juvenile Hall on suspicion of battery, according to the county sheriff's department.

The girl who was assaulted suffered minor injuries and was later released to her mother, authorities said.

This was the second attack at the school in less than a month.

A 13-year-old boy died Sept. 24, just over a week after he suffered injuries in what authorities said was an on-campus attack by two other students. Cell phone video of the fight appears to show one suspect appearing to confront the victim and punch him in the head. A second boy also allegedly strikes the boy. The victim then appears to hit his head on a pillar and drop to the ground. The first allegedly hits the boy a second time before running away.

Two students have been charged with voluntary manslaughter in that case.

In the aftermath of the deadly fight, videos emerged appearing to show fights at another school in the city.

A clip posted by the Facebook group "Keeping up with the I.E." on Oct. 2 depicts a violent incident that occurred inside a Sunnymead Middle School classroom.

Two 12-year-old girls were arrested and a third is being sought in connection to the "student-on-student assault."

On Sept. 20, another video was posted by the same Facebook group. This clip begins with a group of students running toward a confrontation involving several girls also at Sunnymead Middle School. After one of the girls is pushed and stumbles backward, a uniformed man rushes in to intervene.

Parents gathered on Oct. 3 to discuss student safety with schools officials. Some parents say the school district needs to have a strict zero-tolerance policy.

"We will factor in all the suggestions and constructive ideas we gather tonight so that we can ensure our students feel safe every single day," Moreno Valley Unified School District Superintendent Martinrex Kedziora said at the time.