Mountain lion struck, killed on 405 Freeway ahead of groundbreaking for wildlife crossing 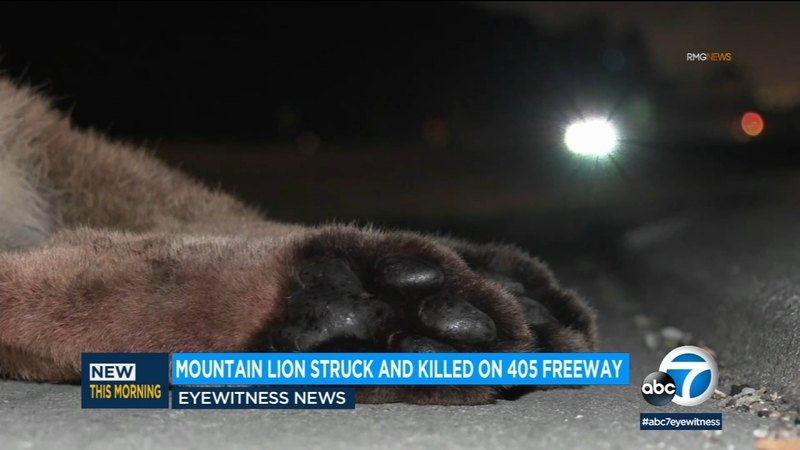 BRENTWOOD, LOS ANGELES (KABC) -- A mountain lion was struck and killed by a driver on the 405 Freeway in Brentwood early Thursday morning.

The large cat was struck on southbound lanes near Getty Center Drive around 1 a.m. According to a traffic log from the California Highway Patrol, authorities reported a mountain lion blocking several lanes of the freeway, stopping traffic through the Sepulveda Pass.

The animal has since been removed from freeway lanes, but officials have not yet identified it. It appears the animal was not tagged with a collar.

The National Park Service says it likely was not P-22, one of the most famous cougars in town, but the mountain lion that was killed Thursday may be one of their study cats.

Groundbreaking is set for next month on what's billed as the world's largest wildlife crossing -- a bridge over the 101 Freeway that will provide more room to roam for mountain lions and other animals.

The fatal crash comes just a day before the groundbreaking ceremony for what's being billed as the world's largest wildlife crossing. Officials say the bridge over the 101 Freeway will give big cats and other wildlife a safe route to open space in the Santa Monica Mountains.