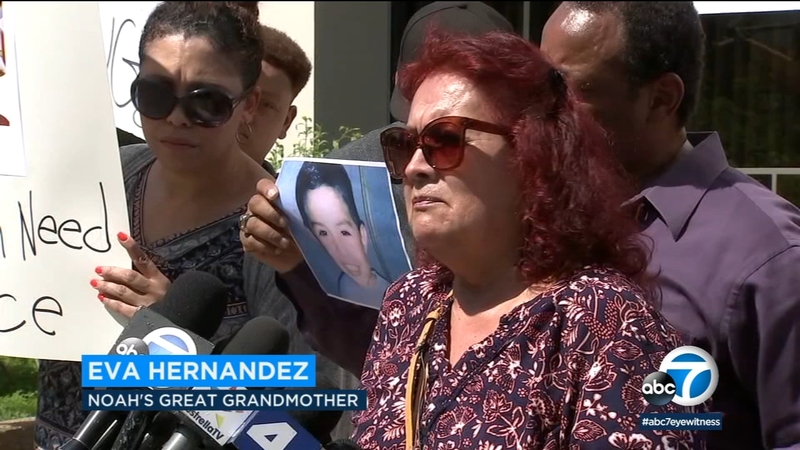 LOS ANGELES (KABC) -- The death of 4-year-old Noah Cuatro in Palmdale is provoking cries for justice and a re-examination of practices at the county Department of Children and Family Services.

Noah is the third boy in the Antelope Valley who died after DCFS had investigated their cases. Previously, there was 10-year-old Anthony Avalos in Lancaster last year, and 8-year-old Gabriel Fernandez in 2013 in Palmdale.

Activists chanted "Justice for Noah" as they joined the boy's great-grandmother, Eva Hernandez, in a protest Tuesday outside the DCFS offices.

Noah lived with his great-grandmother for a time under a court order. She says he begged her to let him stay with her and not return to his parents' home.

"I just wish they would have listened to him," she said. "He did say, please don't do this, don't send me back."

Officials say Noah's parents reported he had drowned in a pool. But investigators are calling his death suspicious and say there were signs of trauma inconsistent with drowning.

Attorney Brian Claypool says a detective told Hernandez there was no water in Noah's lungs and that he was bruised.

"When the medical examiner's report comes out, it will show there wasn't a drop of water in that little boy's lungs," Claypool said.

No arrests have been made in Noah's case.

In the meantime, the Los Angeles County Board of Supervisors is calling for a detailed review of Noah's case.

"We need to do a better job of providing support and resources to the Antelope Valley - for Gabriel, for Anthony, and now for Noah," said county Supervisor Kathryn Barger.