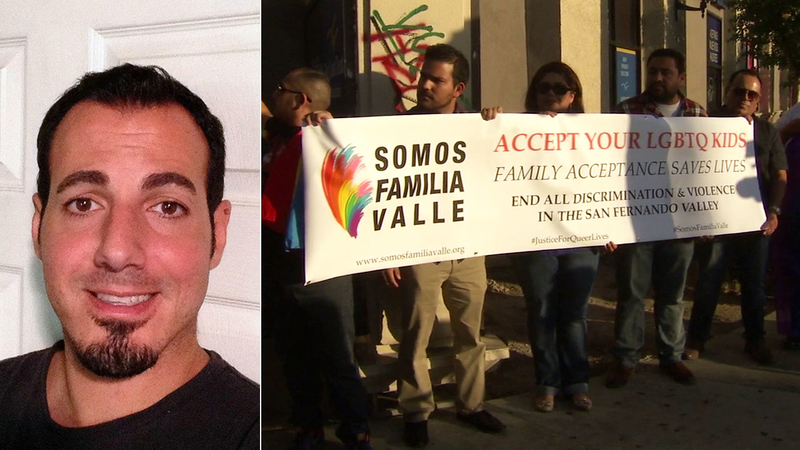 NORTH HILLS, LOS ANGELES (KABC) -- About two dozen members of Somos Familia Valle, an LGBTQ community group based out of the San Fernando Valley, gathered in North Hills Monday to promote peace and tolerance following the alleged murder of a gay man by his own father.

The support rally was held at the corner of Nordhoff Street and Sepulveda Boulevard less than a mile from the murder scene.

The suspect told police he shot his son in self-defense after he discovered his wife's body in their home. Rabihah Issa, 68, was found stabbed to death but an investigation into her murder is ongoing.

Organizers say they held the rally to advocate for family acceptance toward all LGBTQ children as well as to demand an end to discrimination and violence.

"When one of these family tragedies happen, this sends a strong message that there's a lot more work that we need to do, anti-violence work, work to educate our communities to rise above homophobia and transphobia and most importantly, to really address mental health issues," rally organizer Ronnie Veliz said.

Issa is being held without bail on one count of premeditated murder as a hate crime. He's scheduled to be arraigned at L.A. County Superior Court on April 11. If convicted as charged, he faces life in prison without the possibility of parole.