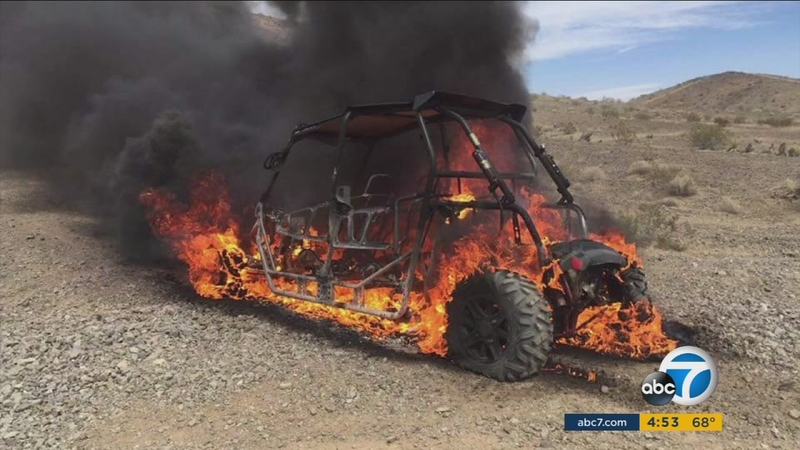 LUCERNE VALLEY, Calif. (KABC) -- A Big Bear resident said his severely scarred arms serve as a reminder of how a fun day of off-roading with his girlfriend in Lucerne Valley ended in terror in May.

"I felt a rush of heat and I glanced back and I saw a burst of flames," Gordon recalled.

He said in just seconds the vehicle was fully engulfed in flames, and that somehow he and his girlfriend managed to escape.

Gordon said he hit the ground and rolled as his arms and legs were on fire.

"All the skin slid off my hands," Gordon described. "I was melting."

Gordon said he spent a month in the hospital recovering from second and third-degree burns to more than 20 percent of his body. His girlfriend also suffered burns to her legs.

Gordon, who worked as a metal fabricator before the incident, said painful skin grafts followed.

"Those procedures were almost as painful as the fire itself," he explained.

"We're getting reports of these fires happening across the U.S.," Gordon's attorney, Gregory Bentley, with Bentley & More, LLP, said from his Irvine office.

Bentley claimed Polaris has known about a safety problem since 2009 and that there have been more than 160 reports of Polaris RZRs bursting into flames, causing severe injuries and one death.

Bentley filed a lawsuit against Polaris and Seidner Enterprises - doing business as Bert's Mega Mall in Covina - the retailer that sold the 2014 Polaris RZR to the father of Gordon's girlfriend.

"With the voltage regulator it allows too much current to come through and water gets inside the circuitry, it gets hot and ultimately it explodes and it catches on fire," Bentley continued.

The complaint alleged Polaris issued a recall of its 2015 RZR models 900 and 1000 due to potential fire hazard, noting a "pinched fuel tank vent line as the cause."

But Bentley said more fires still took place leading to another recall in 2016.

In April, Polaris issued a massive recall, more than 130,000 vehicles, due to reports of thermal-related incidents, including fires, involving certain RZR 900 and 1000 off-road vehicles made since 2013, including the one Gordon was driving.

Gordon said he never knew about the recall and neither did his girlfriend's father who owned the RZR.

The complaint alleged Polaris and RZR retailers like Bert's Mega Mall failed to make sure that RZR owners and users were notified of the recall.

"If we had any idea we wouldn't even get close to the vehicle," Gordon said.

"I use tools and I work on cars a lot and I can't go back into that field because of the intense heat of welding," he continued. "My doctors told me I cannot even be in direct sunlight for two years to protect my arms because of my burns."

His attorney was seeking full compensation for Gordon alleging he suffered permanent scarring and nerve damage for the rest of his life.

Bentley also said they're seeking punitive damages against Polaris because of its alleged gross failure to protect and warn the public about the dangerous defects involving the Polaris RZRs.